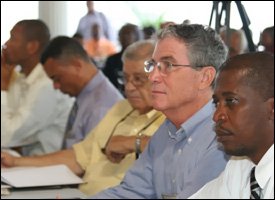 Participants at Nevis Consultaion On The Economy

General Manager of the Bank of Nevis Mr. Everet Martin believes that government’s partnership with the private sector is imperative to engender future prosperity.

Mr. Martin’s comment came when he addressed participants at the 3rd consultation on the economy hosted by the Nevis Island Administration’s Ministry of Finance (NIA) on Tuesday.

“While there are public goods such as education, health and road developments which are better left to government for development, there are growth areas that should be left to the private sector.

However, he added that the private sector should not wait on government but instead identify areas of development to participate in.

Mr. Martin listed a number of initiatives during his presentation and made recommendations to the NIA which he said were intended to identify some growth areas, which would lead to a stable economic environment and sustained future prosperity.

Among the issues he addressed were debt management, government expenditure, tax reform, civil service reform, tourism, offshore sector, non traditional growth areas and improved governance which he said would serve no purpose unless there was public trust and confidence in government.

“There is a need to review public sector productivity. An audit of the jobs in government needs to be conducted and job descriptions revised with specific performance requirements and accountability.

“Further there is need for enhanced financial reporting both outward and internal. Such reporting must include parliament, ministers, government officials, electorate, tax payers and the general public. Transparency and openness would not only improve general corporate governance but build public trust and confidence,” he said.

Notwithstanding, Mr. Martin noted that the fostering of an economy, based on his proposed initiatives, could not succeed in the absence of effective corporate governance in the public sector or the collective will and partnership between the private sector and government.

He said that both the government and the private sector should collectively continue to strive to keep “Nevis Nice”.