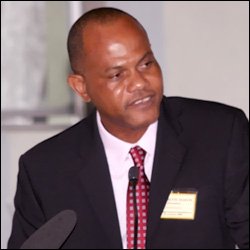 Mr. Everett Martin – GM of The Bank of Nevis

General Manager of the Bank of Nevis Mr. Everet Martin expressed the view that all departments in the Nevis Island Administration (NIA) should make a concerted effort to prioritise spending in pursuit of debt reduction.

Mr. Martin’s comment came when he delivered remarks at the 3rd Annual Consultation on the Economy on Tuesday under the theme “Engendering a prosperous future by creating stability and growth through improved governance.

“An effective debt management strategy must prioritise government spending. An efficient and effective public expenditure management programme must include a consistent macroeconomic framework in presenting the budget, effective control mechanisms on overall expenditure and a budget reporting system that produces reliable, comprehensible and transparent and timely data,” he said.

In addition Mr. Martin said the Public Sector Investment Plan (PSIP) needed to be reviewed to ensure that funds were expended on high income generating projects and boost employment.

He also pointed to the need for the use of proposal appraisal techniques in the determination of which projects should be executed.

In relation to tax reform, Mr. Martin contended that critical consideration should be given to reform the tax system, one which would not impede growth.

He proposed a system which included a corporate income tax with a rate that was uniform and moderate.

“The introduction of a more transparent regime for the granting of tax concessions [and] an effective tax administration that facilitates Ã¢â‚¬Ëœvoluntary compliance’ [that] effectively monitors tax payments and promptly follows up on late payment or non payment,” he said.

With regard to civil service transformation, Mr. Martin said efforts should be intensified to overhaul the civil service.

He called for a more professionally run and well functioning organisation whose members were adequately remunerated. A transformed civil service, he contended, would assist in the development of a more stable environment for entrepreneurial activity that could only rebound to the benefit of Nevis.

Mr. Martin also pointed to the structure of the Tourism sector which he said would be in danger if it was allowed to continue in its current state.

The Bank Manager said while there was need for another five star hotel on the island beside Four Seasons Resort, government should work closer with boutique hotels to ensure their survival and expansion.

In addition he said more should be done in the area of yacht tourism; Nevis should be promoted in non traditional geographical areas; efforts should be increased in the expansion of intra ““ Caribbean tourism and government should continue its laboour market reforms which enhanced job search and training.

In the Offshore sector, while Mr. Martin called for a review of the current model of the sector, he said compliance with all international regulations and guidelines should be ensured.

“There is also a need to engage the authorities in the United States and Europe as well as target non traditional markets such as Asia, International financial service is a legitimate business conducted in all the major financial centres such as New York and London.

“The issue is not the type of business conducted but the location. It is critical therefore that we reassess the modalities utilised for the development and promotion of the sector,” he said.