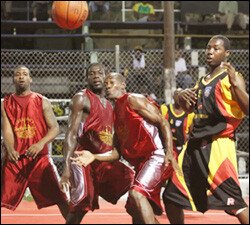 Ghetto Roots and Hitters Vie For The Ball

The much storied Hitters /Ghetto Roots rivalry added another exciting chapter this past Sunday when the Horsford’s sponsored Ghetto Roots continued their dominance over the 19 times SKABA champions Rams Hitters.

The excitement at basketball city was palpable as hundreds of fans turned out to either see Hitters cake walk to another their 20th Championship or to watch Ghetto Roots continue their dominance of Hitters. This was the 4th meeting of the season between the two teams and the 2nd for the playoffs. Ghetto Roots entered the game having won their last 2 games against Hitters. Hitters came in having lost just 2 games for the season. Unfortunately for them the two losses were to Ghetto Roots.

The game began with Hitters exuding much confidence as Ansel “Bonzi” Revan scored almost at will for the first 10 minutes of the game. Ghetto Roots players seemed lethargic and nervous as the experienced Hitters sank shot after shot. The first quarter ended with Hitters enjoying a 22-17 lead. The 2nd quarter was much the same as Revan continued his torrid scoring pace sinking jumper after jumper and Hitters outrebounding their opponents. At the end of the half Hitters was up 48-45. A score that was quite surprising considering the fact that Hitters played an excellent first half and Ghetto Roots played most of the half without star player Levi “By-By” Fyfeild aka De  Black Mamba. Fyfeild was obviously nervous in the first half and Coach Alexander made a surprising sub which resulted in the Mamba being on the bench for most of the first half.

The 2nd half began with hitters scoring the first few points.  However Fyfeild finally got into the grove and joined Carlos Monzac and Rymal “Bally” Browne to blister the Hitters in the 3rd quarter with a series of spectacular plays which resulted in Ghetto Roots taking advantage by the end of the 3rd quarter.

The 4th Quarter was all Ghetto Roots as the Black Mamba along with Bally Browne and Quincy “Puppet” Taylor lit up the Hitters team with a string of 3 pointers  along with a spectacular “put back” dunck by William Natta who dominated the boards with some 10 rebounds most of which came in the final quarter. The last 4 minutes was all Ghetto Roots as By-By along with Bally Browne brought the crowd to their feet with some exciting plays down the stretch. The hitters made a series of frantic subs but the Ghetto Roots dynamic duo of Bally and By-By was simply too much for the Hitters to handle. The final score saw Ghetto Roots with a very impressive blow-out win over Hitters 101-85.

Rymal “Bally” Browne led all scorers with 27 points, 5 rebs and 4 assists. Levi “By-By” Fyfeild aka The Black Mamba ably assisted with an exciting 22 points, 9 rebs, 7 assists. Carlos Monzac and a steady 19 points and 11 rebs . Quincy Taylor had 14 pts which included 3 three pointers and William Natta rounded up things for the Ghetto Roots with a very steady 9 points and 10 rebounds.

“I think Hitters played a very good game with Ansel , Longman and Shabba having their usual impressive nights,” said Ghetto Roots manager Wallis Wilkin. ” I think Hitters played well but our players played better down the stretch in the final 2 quarters. I am proud of the team as they were able to weather the early game storm by Hitters who led for most of the first 3 quarters. I’ve always had confidence in the talent of my players but I think their mental strength is now improving and at the right time. I think once we stay focused we should be ok for game 2. We expect Hitters to bring in whomever and whatever is necessary to win Game 2 and we do not expect to have an easy game 2,” Wilkin continued

This is Ghetto Roots 3rd straight victory over Hitters for the 2009 season.

Game 2 of the 3 game series takes place on Thursday at Basketball City at 8:00 pm. This will be a do or die for Hitters who will have to win or go home.