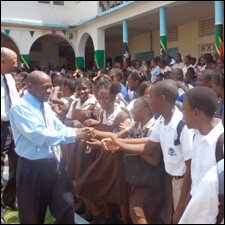 Young people in the Federation of St. Kitts and Nevis have been called upon to make good use of the opportunities provided in the twin-island Federation.

Delivering the traditional Independence Message on Saturday to mark the 26th Anniversary as a sovereign nation, Prime Minister Hon. Dr. Denzil L. Douglas noted that despite all of advances and very high socio-economic rankings, the twin-island Federation like many countries throughout the world, are now seeing a rage, a violence and a definite air of tumult and turmoil amongst certain segments of the young male population.

“You, too, have a responsibility to run away from those things that will make you stumble and deny you the chance to fulfill your God-given potential. The media’s glamorization of thug culture”¦encouragement to spend every penny you have plus the pennies you do not have”¦..promiscuity”¦.alcohol”¦..drugs”¦.indifference.  Put another way, you can believe me when I say that hard work and sacrifice will be abundantly rewarded.  Good manners and patience are far more powerful than offensiveness and aggression,” said Prime Minister Douglas.

He told the youths that the lifelong benefits will be greater than they can ever imagine and that the countless opportunities have been put in place geared towards the development of their mind, body and soul.

“Step forward, young people.  Make good use of all that this country has placed at your disposal,” Prime Minister Douglas advised.

He used the occasion to call upon all the people of St. Kitts and Nevis to think seriously about “what it is that we have ““ and have not ““ been doing that has been causing some of the young men to fall.”

“And this, as a people, we have to turn around.  But let us not be like the five foolish virgins who sat around hoping that someone would bring the oil that they needed for their lamps to shine, waiting to see who else would assume their responsibilities, maybe even becoming surly and critical when there was no oil coming and they were stuck in the dark,” said Prime Minister Douglas.

He pointed out that individuals within the sound of his voice who want St. Kitts and Nevis to be a shining city on the hill, must understand that it is up to him or her ““ as an individual ““ “just as it is to all of the rest of us, to get up, to get out, and to get moving to make our own lamps shine ““ and our country glow.”

“We are already a shining city on the hill in terms of telecommunications, health care, infrastructure, education, law enforcement, and so on.  Where the weaving ““ and, indeed, the saving, of our social fabric is concerned, however, it is the values, the priorities, the involvement, and the caring of the entire society that will, in the end, determine the outcome,” said Dr. Douglas, adding:

“As a people who want to end the rage, the anger, and the violence, it is incumbent that we begin to ask ourselves exactly what it is that we, as a society have been doing, or not doing, that is causing some of our young men to stumble.”

He suggested to his fellow government ministers  that in the formulation of policy, all efforts must be made to “ensuring that the “˜food’ we offer will not only enrich the body but will also focus even more keenly  on the stability and the elevation of the soul.”

“Opposition politicians ““ as we engage in the days and weeks ahead, let us commit ourselves to think less about what might be good for our respective parties, and more about what it will really take to calm, to stabilise, and to preserve the hearts and minds of our country’s young and still-on-the-straight-and-narrow,” said Prime Minister Douglas.

In appealing to mothers, fathers and guardians, Prime Minister Douglas submitted: “What is the “food” that we must give up so that our young men will no longer stumble?  Is it our gruffness?  Our indifference?  The shrugs of which we have too many?  The words of guidance, of which we have too few?  The over-emphasis on the things that money can buy?  The devaluing of listening”¦.of caring”¦..of the stabilizing power of time?  Just time ““ in all its simplicity – spent with children, and the young?

Teachers ““ If food makes my brother stumble, I will never again eat meat, lest I make my brother stumble.  You perform one of the most important roles in any society ““ NOT because you teach geography or woodwork or French.  But because the children of any society spend more waking hours with you than they do with even their own parents.  The psychological impact you have on any nation’s children, then, is enormous.  What is the impact of steady encouragement?  What is the impact of repeated ridicule?  Yours is not an easy task, and we thank you for all you do.  We ask you now, at this important juncture in our nation’s history, to re-commit yourselves to being positive influences in the lives of your students”¦”¦and models of behavior worth emulating”¦”¦because your influence is far more vast – and far longer lasting – than you may know,” said Dr. Douglas.

He also had a word to shop-keepers, doctors, gardeners and artists. “We have all accommodated so much that cause the young to stumble.  Indifference.  Callousness.  Modern, corrosive, values.  We need you ““ and all whom you know ““ to be aware of, to speak out, and to break the further encroachment of these toxins within our society.”