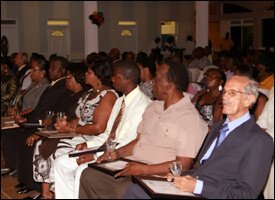 Minister of Social Development on Nevis Hon. Hensley Daniel described eight local honourees as thermostats who transformed the lives of many people on the island. He made the comment as he delivered an address at a recent awards ceremony in celebration of National Heroes Day.

He said the honour bestowed on them by the Nevis Island Administration (NIA) would ensure that the people of Nevis did not miss the opportunity to learn from those who had blazed the trail in the past.

“This significant ceremony is intended to build consciousness among our people, build an awareness so that they become familiar with the people and events in the history of the island.

“It challenges us to build an indigenous frame of reference and move away from the Eurocentric ideas so that people begin to look at the people with us, as those people who matter most,” he said.

Mr. Daniel explained that the ceremony fostered the development of national pride and brought into sharp focus the motto of St. Kitts and Nevis “Country Above Self”.

“They were putting the country above themselves long before independence and long before the motto was conceptualised.

“Anybody who had been in sports, education and politics, none of which paid money, none of which resulted in any great financial rewards had to be putting the country above selves,” he said.

The Social Development Minister cited that it had always been abnormal to him for an independent country to have foreign idols and foreign symbols.

He said he was aware of the tendency to ignore the contribution of the local people and if the people of Nevis were asked who their heroes were they would more than likely not mention any of the persons honoured.

However, it was the responsibility of the Government to point the people in the right direction and to let them understand, that whenever they thought of heroes, they would think of the eight honourees.

“We are writing a new chapter in the history and development in our country. This chapter is going to begin with these honourees.

“This chapter must say to us that these people put themselves, in many instances, at great risk, that these persons laboured for no reward and gave without counting the cost,” he said .

Mr. Daniel said further that the ceremony was to help Nevisians build self esteem and pride and to promote and sustain a high level of patriotism.

“I am myself quite troubled in many instances where the level of commitment to country, the level of patriotism, that love and loyal support of the country is very low in some instances and I am to hope this very significant ceremony will help to point to a new direction,” he said.

The Minister also explained the basis for the awards ceremony which he said was more about gratitude.

The event was attended by other members of the NIA and family and well wishers of the honourees.