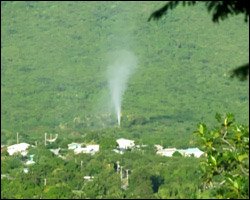 The first ever geothermal conference in the Eastern Caribbean at the end of June is expected not only to attract at least 75 participants from international agencies but by extension would aid the tourism industry on Nevis.

Permanent Secretary in the Ministry of Natural Resources and the Environment in the Nevis Island Administration (NIA) Mr. Ernie Stapleton told the Department of Information on Tuesday that the three day event (June 30-July 02), will draw key players in geothermal development that would stay at the island’s hotels in proximity to the venue at Mount Nevis Hotel.

He said though the conference co sponsored by the NIA, the United Nations Economic Commission for Latin America and the Caribbean (UNCEPAL), the Organization of American States (OAS) and the Caribbean Renewable Energy Programme (CREP) ““ German Tecchnical Corporation (GTZ) had generated mush interest but the number of participants had to be limited on account of the size of the venue.

The event replaced a postponed international conference that had been planned for the more spacious Four Seasons Resort prior to the damage the facility sustained from the passage of Hurricane Omar in 2008.

Notwithstanding, Mr. Stapleton explained that the total cost of the conference would not be shouldered by the NIA.

“It is really tremendous and amazing as to the type of assistance so there is hardly any financial burden on the NIA because of this collaborative effort that we have,” he said.

The Permanent Secretary explained that UN ECLAC would fund country representatives along with the CREDP-GTZ and therefore would send invitations directly to the related countries. The NIA and WIP have invited others.

He said sponsorship had also been secured from companies that were directly related to various aspects of the geothermal development on Nevis. NEXAN the company that will lay cables and Turbo Care a subsidiary of Siemens, who are constructing the geothermal plant, will finance lunch and coffee breaks on day one and two of the event.

“TIC Global, the company that involved in project management of the plant construction, they would be sponsoring the welcome cocktail at Mount Nevis on the 30. West Indies Power who is assisting us with preparation as well, they would be providing lunch and coffee break for July 2nd during the University of Auckland Workshop,” he said.

Mr. Stapleton further explained that the University of Auckland based in New Zealand would provide its experts minus the usual registration fee and so “we will not have to pay to have them here,” he said.