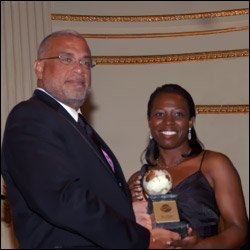 The outstanding political leadership, longstanding and effective advocacy in the field of HIV/AIDS and his tireless efforts to improve the quality of life for all Caribbean peoples has earned St. Kitts and Nevis‘ Prime Minister Hon. Dr. Denzil L. Douglas, the Caribbean Tourism Organization (CTO) top award.

The Lifetime Achievement Award, the highest honour bestowed by the CTO was presented at the 36th Annual Governments of the Caribbean State Ball at the conclusion of Caribbean Week in New York.

While Prime Minister Douglas could not be present to accept the Award in person due to his hosting of the 6th PETROCARIBE Summit on St. Kitts, his daughter, Dr. Andrea Douglas accepted on his behalf.

In apologising for the Prime Minister’s absence, a letter of thanks from Dr. Douglas was read to the large audience by Sen. the Hon. Ricky Skerritt, Minister of State for Tourism.

In the letter, Prime Minister Douglas said he was “humbled to have been recognised by your organisation for my work”¦  Over the past three decades as a teacher, medical doctor, parliamentarian and through to my current time as Prime Minister, all I have ever wanted to achieve was to help bring an improved quality of life to as many of our people as possible.”

“I therefore thank all those of you who have made this Award possible tonight.  I accept it with pride and with the appreciation that my work is not yet done”¦ I promise you that this recognition of my service will further help to encourage me to continue to push forward energetically and purposefully on behalf of the people of St. Kitts & Nevis and the Caribbean.”

Dr. Andrea Douglas accepted the Award on her father’s behalf, which was presented to her by Chairman of the CTO Council of Ministers and Tourism Minister of Antigua & Barbuda John McGinley.

She said, “It’s with great honor and pride that I come this evening to accept this very distinguished award on behalf of my father”¦who continues to dedicate his life to bettering the lives of others.  On behalf of myself, my family, and the people of St. Kitts and Nevis, I thank you.”

Throughout the announcement and presentation of the Award, the crowd of Caribbean dignitaries who were gathered for the Ball cheered and clapped enthusiastically, some even waving the national flag of St. Kitts & Nevis to show their appreciation.  The delegation from St. Kitts included Senator Skerritt, St. Kitts Tourism Authority’s CEO Mrs. Rosecita Jeffers and other Officers from the Authority’s New York office along with Counselors from the Permanent Mission of St. Kitts and Nevis.

The CTO Lifetime Achievement Award is the latest of many honors and accolades Dr. Douglas has received for his work, including the Gandhi-King-Ikeda Peace Award and, most recently, the Global Award at the 15th Annual Trumpet Awards at the Bellagio, Las Vegas, Nevada.  His contributions in the field of HIV/AIDS have been recognized by US President George W. Bush, former US President Bill Clinton, and New York City Mayor Michael Bloomberg.

In addition, his regional leadership role was lauded by the United States Congressional Black Caucus and the American Foundation of the University of the West Indies presented him with its Legacy Award.