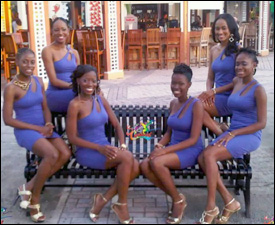 With special emphasis on “fun, fete and bacchanal” as highlighted in this year’s slogan, the December 17th, 2010 to January 3rd, 2011 activities, with a few pre activities, are expected to capture the attention of persons throughout the region.

The island of Nevis will this year receive a sample of “Sugar Mas” with the December 11th hosting of a Carnival Queen Fashion Show.

Other activities to mark the annual celebration are the Beaumont Park Horse Racing and Entertainment on December 12th and 26th, the LIME Calypso Semi-finals and Senior Monarch on December 16th and 29th respectively, December 17th’s official opening of National Carnival and Female Calypso Bacchanal and Best of the Rest Competition, the Soca Monarch Contest on December 18th followed by the Prince and Princess Pageant on December 19th, J’ouvert on December 24th, the Grand Carnival Parade on January 1st, Carnival Cool down on January 2nd and Last Lap on January 3rd. The Junior Calypso Competition will be joined with the National Talented Teen Pageant.