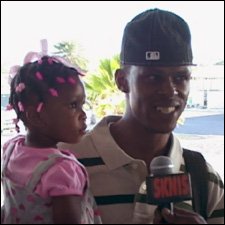 James Daniel and His Daughter Ziana

Via its Ministry of Health, the Government investigated the possibility of partnering with the Government of St. Vincent through its children’s plastic surgery programme which takes place at the Memorial Hospital in partnership with the Children’s International Hospital based in Virginia.  Chief Medical Officer Dr. Patrick Martin told SKNIS that a preliminary visit was conducted by Permanent Secretary in the Ministry of Health Mr. Elvis Newton and himself.  He said the exploratory trip took place November 2009 and they learnt that the surgeons and nurses from the Children’s International Hospital journey to St. Vincent every two to three months to perform plastic surgery.  This he said, proved to be a good avenue for the Federation to partner with the Government of St. Vincent and the Grenadines.

As a result, a new partnership emerged and four children and their parents left the Federation last Saturday with the intention of repairing various physical imperfections.  The children who travelled were Stevencia Bowens, Kasaiah Herbert, Kassandra Simmonds and Ziana Daniel, however, only three were operated on.  The fourth procedure was postponed because the child did not meet the age requirement.

The children’s parents said that they had been informed of the free medical opportunity by the Chief Medical Officer.  Shawnette Herbert travelled with her son Kasaiah.  She thanked the Ministry of Social Development for its assistance and acknowledged the Government for the opportunity to improve her child’s life.

Similarly Marsha Bowens the mother of Stevencia; Shamika Bergan the mother of Kassandra; and James Daniel the father of Ziana; all were grateful for the free medical procedures which otherwise could have cost thousands of dollars.  Mr. Daniel, the only accompanying male guardian explained that his child’s mother was unable to make the trip because of certain obligations and so he felt it was his duty to travel with the child.

The children ranged in age from 8 months to four years.  The airplane tickets for the children were provided courtesy of the Ministry of Social Services while parents had to take care of their airfares and accommodation.  Dr. Martin explained that the programme is open to all children of St. Kitts and Nevis who simply need to be referred by the Government through the Ministry of Health.  He explained that the surgeons from the International University execute the plastic surgery procedures along with a surgeon resident to St. Vincent.  Similarly the nurses who care for the patients before and after the surgical procedures are from both the American and Vincentian hospitals.