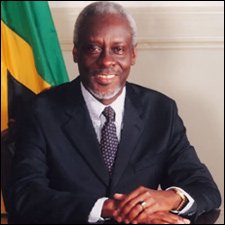 Former Jamaica Prime Minister, the Most Honourable P.J. Patterson, has endorsed a move by the Organisation of Eastern Caribbean States (OECS) to form an Economic Union by June this year.

“If we are to overcome the many obstacles we face in the region and confront the formidable challenges which confront us we cannot retreat into the confines of isolation or be parochial in our thinking,” the Jamaican-born Caribbean statesman told over 600 persons at the annual Prime Minister New Year’s Gala hosted by the St. Kitts and Nevis leader, Hon. Dr. Denzil L. Douglas over the weekend.

“We cannot depend on others to rescue us. Our best and only hope for success lies in the pursuit of shared goals, strategic coordination and a pooling of the resources we share, natural and even more importantly, our human capital,” said the former Jamaica leader who pointed to the role that Prime Minister Douglas played in that regard.

The OECS groups the islands of Antigua and Barbuda, Dominica, Grenada, St. Lucia, St. Vincent and the Grenadines, Montserrat, St. Kitts and Nevis, Anguilla and the British Virgin Islands (BVI).

These islands, except the BVI, already share a number of institutions including a Central bank and a common judiciary.

Montserrat, a British Overseas Territory and a founding member of the sub-regional grouping, did not sign the accord.

The new treaty is an upgrade on the original Treaty of Basseterre that led to the establishment of the OECS 28 years ago. It allows for the delegation of certain legislative authority in certain areas to the heads of government and for the formation of a Regional Assembly of Parliamentarians comprising members of the parliaments of the individual islands.

In addition, the new treaty gives a “much more defined role” to the OECS Commission in getting the interlocking arrangements between the countries and the OECS.

OECS technocrats said that the changes would lead to a more efficient implementation of policy in the sub-region.

Patterson said that the region needed at this time is a greater sense of a shared destiny “and a necessity for all members of our Caribbean family to be fully involved in shaping it.

“It needs wise, experience, dedicated and visionary leadership. It is through enlightened leadership and a creative spirit that we will realize our dreams and fulfill our visions.

“I wish the entire family of the federation of St Kitts and Nevis, a truly happy New Year and may the wish of every citizen of faith and sober judgment come true,” he told the Gala Event.

The one-day event, which also included performances by Jamaican and Trinidad and Tobago artistes, was be held under the theme “One Family” that Prime Minister Douglas said underscored “the stark reality that we are in this together and that our best chances of survival rest in unity.