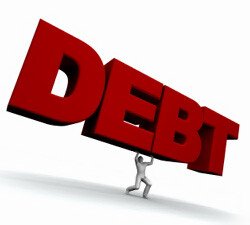 Denzil Douglas and the Labour Government have not only given us a crime and murder crisis, but, they’ve also given us a crushing national debt. We’ve had 14 years of Labour Government, and each one of them produced a budget deficit. Our debt service ratio is 185% of GDP, which is among the highest in the world and ranks right up there with Zimbabwe.

“There is no denying that the National Debt of St. Kitts and Nevis was a problem of mammoth proportions long before the advent of the global financial crisis. Were the international recession to end tomorrow, St. Kitts and Nevis will still be facing crisis,” said Grant. “…the present government came into office in 1995 with an economy, which was growing at six percent per annum. The national debt was EC$212 million. The debt service ratio was 3.73% of GDP and 5% of recurrent revenue. By 2008 the national debt had risen to EC$2,600 million dollars or 2.6 billion dollars. Every man, woman and child in the Federation including every single individual in this room owes $62,500.00. The debt service ratio is 185% of GDP and rising up from 3.73%.”

Our finances are a disaster thanks to Denzil Douglas and the Labour Government. The Governor of the Central Bank of Trinidad and Tobago and the Caribbean Development Bank have both expressed serious concern about our debt. The problem is immense and it was caused by an inability of Denzil Douglas and the Labour Government to properly manage our budget.

PAM has a forward thinking solution to deal with the debt crisis brought on by Labour.

“My first act therefore will be to return fiscal prudence and discipline to the management of the economy. We have estimated that inflated government contracts and wastage of millions of dollars in the last five years that could have been used to stimulate revenue and employment,” said Grant. “A PAM government will implement a new, transparent and accountable procurement policy (and enshrine it into the law), immediately on assuming office. There will be a clearly defined tendering process. Bids will be available for public scrutiny and the government must (by law) provide reasons for acceptance of the winning bid. By such measures, our local entrepreneurs will become confident that there are fair opportunities to compete in the economic initiatives of the Federation.”

“Cost overruns on Government projects is another area where significant savings can be made,” Grant said. “I need only focus your attention on the West Basseterre bypass road, which the IMF article IV consultation in June this year put at USD $7.6m or some EC$20.6m. We all know that the project is more than one year overdue and there have been heavy overruns. The selected bid was in the region of EC $12 million which now shows that on this project alone the overrun has already cost us some $8 million dollars.”

Grant also highlighted wastage at RL Bradshaw International Airport, and the high cost of generator rental. These are wastages that affect our national debt.

Grant concluded, “The debt will have to be renegotiated at more favourable rates and conditions than presently exist. We must also take steps to consolidate some of our debt. We have moved away from concessionary rates, but our credit rating makes borrowing at the prevailing commercial rates unsustainable.”