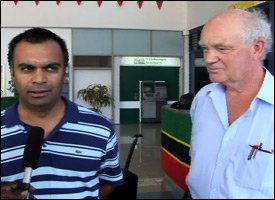 Director of Business Development, Energy Division of Nexans Norway, Mr. Domenico Gerace, confirmed that West Indies Power (WIP) Nevis Ltd’s plan to generate geothermal energy for the people of Nevis, St. Kitts and beyond, was a feasible one and his company was excited about the project.

Mr. Gerace made the comment following a meeting on Nevis with officials from WIP, the Nevis Island Administration (NIA), the Nevis Electricity Company Ltd. (NEVLEC) and the St. Kitts Electricity Department, at the Oualie Beach Hotel’s conference room on October 1.

“Of course we would be able to send power to the other islands. We are looking forward to it and I can tell you it is feasible so it’s just a question of time. So we are very excited about it.”

Chief Executive Officer of WIP Mr. Kerry McDonald told the Department of Information that Nexans was the world’s leading provider of submarine cables and their installation.

He said WIP had been working with Nexans with regard to the installation of the cable for both local and export transfer of power. He also disclosed that that a number of technical concerns were addressed during the meeting.

Mr. Kerry said too, that though the geothermal project had some setbacks due to the tight supply of steel, the major drilling equipment for the generation side of the project was now expected on Nevis in November or December. However, he said the delay would not affect the projected time for power generation, in the last quarter of 2009 or the first quarter of 2010.

Senior Manager, Sales and Marketing, Nexans Canada Mr. Safiq Virani was also present at the meeting provided sales and commercial support. He explained that the project would be administered from both the Canada and Norway offices.