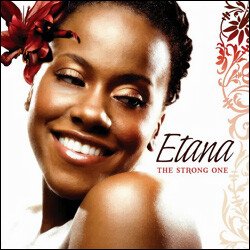 Etana – The Strong One Album

With an ever growing collection of prestigious music awards ranging from “Female Vocalist Of The Year 2007-2009″ to “Most Admired Female Artist” Reggae singer/ songwriter Etana has struck a cord with the masses and like any beautiful melody she’s bound win the hearts of the people in St. Kitts and Nevis when she appears on stage on Saturday night at the annual Miss Labour Pageant at Carnival City.

According to her MySpace Etana is spirited in her approach to communicate unfitting and inspirational messages to the youth she’s been described by critics as the truth, one who will bring about real change with her powerful and captivating voice that at times seems flawlessly pure.

Rebellious in her approach to denote systematic oppression against all races Etana takes pride in being an artist, she feels strongly that her responsibility is to express positive vibrations in her music and from this she will gracefully admit to staying the course.

Born Shauna McKenzie Etana spent her youthful days playing in the hillside community of August Town situated in the South Eastern side of Jamaica. The only daughter of a fairly large family of boys she was as curious then as she is determined now doing the mischievous things most children tend to do at an early age. Attending school locally up until 1992 when she migrated to the U.S to start a new life in the sunshine state of Miami Florida Etana was a budding achiever; she finished grade school and eventually went off to college the year after with plans of becoming a Registered Nurse.

During her studies at Broward Community College Etana became extremely passionate about music, she was consumed with the joy of creating her own mix of the different genres she would attentively listen to in her earlier years.

A hardened fan of Reggae, Pop, Hip Hop and Jazz Musicians she found inspiration in Whitney Houston, Lauren Hill, Jill Scott, Sizzla Kalongi, Marcia Griffiths and the legend Bob Marley all of who eventually gave the then academic the will to explore a new and potentially more suited career in Music. In 2000 after making a tuff decision to prematurely exit college Etana attempted a shot at stardom when she joined a girl group by the name “GIFT” which was being courted by Universal Records. Sexy, Reviling and conforming to the industry stereotype of how a woman should dress Etana fell victim to her dreams of becoming a mainstream star.

It wasn’t her ideal fit but she complied to the record labels requests and gave in to her groups glamorous appeal until one day while on a video shoot for their lead single she could bear it no more walking away from the spotlights and returning to her place of birth Kingston, Jamaica to start fresh as an entrepreneur looking to grab a piece of the Cyber Market with an Internet Cafe. Down but not out Etana still wanted to do music but only in her own way, she wanted to send a different message and portray a more eloquent look and this opportunity came in 2005 when a friend brought her to Fifth Element who at the time was prospering from the strength of Richie Spice who was heavily booked for several American and European Tours.

Auditioning for a shot at becoming the backup vocalist for Spice Etana vocally floored his management team and was handed a plane ticket to do a few shows in the U.S. The ensuing fifteen months followed with the now permanent songstress soaking up valued experience as a stage performer with performance credits in Europe and North America. Eager to make her own mark Etana boldly attempted a hit single one day while chilling with the guitar player and Percussionist from Richie Spice’s band. The idea had been floating in her thoughts for weeks and like magic the melody for her debut smash single “Wrong Address” was born.

Simple yet effective the single was a fusion of Jazz and Reggae, it was the first of its kind and in 2006 the song was rewarded with heavy radio rotations plunging it in the number 1 position of several local charts. Describing her style back then Etana was quoted as saying “I do music straight from the heart, straight from the soul, straight from the people I see in everyday life” and so came about her second major hit Roots which was an intriguing mix of African and reggae cultural sounds fused with Jamaican Creole.

The song became an anthem because of the definitive statement “You can’t water down and dilute” featured in the chorus. Video’s for both songs helped bring Etana to the forefront of Reggae and during the summer and winter of 2007 she made her mark as a solo artist performing on international events like Reggae Sumfest, Fully Loaded, ATI Live Concert, Irie Jamboree, Welcome to Jamrock and Guinness Sting. Picking up where she left off in 2007 Etana began 2008 with the same level of focus rocking the likes of an Air Jamaica Jazz & Blues Festival in late January so much so that patrons lashed the promoters for putting her on too early.

A few well deserved awards in the bag Etana took home Best Female Vocalist at both the Excellence in Music & Entertainment (EME) Awards and the IRIE FM Radio Awards not to mention an award for Best Solo Female Reggae Vocalist copped at the 1st annual Reggae Academy Awards for which she had nominations in 3 separate categories. On June 17th Etana made history by releasing her debut album “The Strong One” which won the coveted “Album Of The Year” Award at the 2009 EME Awards.

As 2008 came to an end Etana continued to shine with big time performances at the Olympic Grand Gala for the Jamaican Beijing Athletes in October and the exclusive Reggaelution Concert in early December not to mention a one month U.S tour for the month of November. She also improved her online presences with a new fully dynamic website (www.etanastrongone.com) which she launched on New Years Day. Currently promoting her new singles “Caltariba System”, “Free” and “Blessings (ft. Alborosie)” Etana is boldly taking on the world of music with the help of her management team at Solid Agency. Owner of Free Mind Music / The Best Records Etana is poised to do Reggae proud.