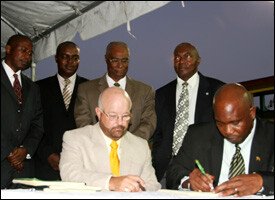 The public event which was witnessed by hundreds of Nevisians was held at the Netball Complex in Charlestown.

Minister of Natural Resources and the Environment on Nevis Hon. Carlisle Powell said he was satisfied that the NIA negotiated a good deal for all the people of Nevis and gave the assurance that the trust into renewable energy would continue.

Mr. Powell said the road which led to the moment had not been easy but the steep increase in the world market price of oil accelerated the Administration’s search for alternative sources of energy.

“The fuel surcharge is now at .15 cents per Kilowatt hour. This is the lowest it has ever been but when the fuel surcharge bit into the pockets of poor ordinary Nevisians, this government turned to geothermal and wind energy in an effort at reducing the hardships caused by this increasing cost of energy,” he said.

Mr. Powell noted that a United States Department of Energy Study in 1998 suggested that Nevis had the potential to provide geothermal energy and the Nevis Reformation Party-led Administration realised the huge economic impact that the successful harnessing of geothermal energy could have on the lives of Nevisians and the Treasury and embarked on an aggressive venture to make it a reality.

“My people, we had to fight hard to get to this point. Your government trusted the findings of studies that suggested that Nevis has more geothermal energy than we can possibly use,” he said.

The Minister said the Administration was not deterred by serious criticism and in January 23, 2007 WIP was granted a license to explore.

The Geothermal Resources and Development Ordinance was later passed in the Nevis Island Assembly in 2008. It set out the parameters that would guide the NIA as it proceeded with the development of the geothermal resource on Nevis and most importantly repatriated control of the resource to Nevis, to the Geothermal Resource Advisory Committee made up of nine Nevisians.

Mr. Powell said the Bill represented the keys to the economic future of Nevis.

Meantime, the Minister announced that Nevis would host a major Eastern Caribbean Geothermal Conference on June 1-2 and had already attracted sponsorship from the Caribbean Renewable Energy Development Programme/GTZ, the Organization of American States, the United Nations Commissions for Latin America and the Caribbean (UNECLAC), NEXAN, Turbo Care (SIEMENS) Turbines and The Industrial Company.


1 thought on “Another Milestone For Nevis Geothermal Power”