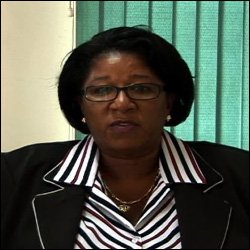 A top Education Official on Nevis has voiced concerns over the decline in the Caribbean Examinations Council (CXC) English pass rate on the island.

Principal Education Officer in the Ministry of Education on Nevis Mrs. Jennifer Hodge added her voice, to a growing concern by the Council, that the Region had experienced a decreased pass rates in English A and Mathematics.

In an interview with the Department of Information, Mrs. Hodge said that the January 2009 results showed a 38 percent acceptable passing grade in English A and 15 percent in Mathematics.

“We too have the same concern. We must encourage our students to read more and to practise speaking Standard English. The dialect has its social uses and should never replace the international Standard English.

“The University of the West Indies has also registered its grave concern about candidates even with English A with an acceptable passing grade not being able to satisfactorily handle the mechanics of the language. It is therefore considering introducing remedial English classes,” she said.

Mrs. Hodge who has been part of the Final Awards Committee of the CXC and had marked papers in English for a number of years said, in many cases the candidates were ill prepared for the examinations.

She said the bulk of the passes fell in the grade III range, which suggested that the candidates did not push for the higher grades and were comfortable with just eking out a pass which left little room for error.

She pointed to the January results which showed that 42 percent of those who sat the exams returned Grade IV.

“Instructors who are preparing private candidates need to protect their reputation and if candidates are not attending classes, then they should not be signed up to write the exam,” she said.

According to Mrs. Hodge, some of the students who received private tuition were not conversant with the laboratory terms and the Council was looking at setting regulations for persons who were involved in the preparation of private candidates.

The CXC offered the Caribbean Secondary Education Certificate (CSEC) examination in January each year in 12 subjects for re-sit and private candidates.

For the January 2009 examinations Nevis entered candidates in nine subject areas with a total of 124 subject entries.

Notwithstanding, an optimistic Mrs. Hodge had words of advice for candidates who were in preparation for the 2009 May/June exams.

She urged them to prepare thoroughly; make the effort to send in the best possible School-Based Assessment (SBA); pay attention to their teacher’s guidance; get the SBA’s on time to Barbados in order to meet with the April 17th deadline and also the orals for Modern Languages Caribbean Secondary Education Certificate (CSEC) by April 20th and Caribbean Advanced Proficiency Examination (CAPE) by April 27th.

“Put in hours studying; burn the midnight oil and go to the CXC website at www.cxc.org, [to get additional information],” she advised.