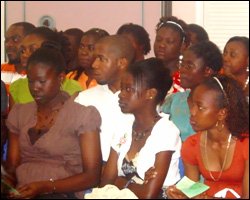 Wednesday evening’s session of Youth Chat was hailed a success, as persons were able to learn more about opportunities available to them, and highlight concerns to the top leadership of St. Kitts and Nevis.

Before the session started, Renal Edwards of the Basseterre Leo Club and Tregenza Henry of the Sandy Point Hoop Camp Club told SKNIS that they were looking forward to the activity which also featured presentations by a youth panel on various aspects of education and business. The potential of “Curriculum Activities in Curbing Antisocial Behaviour” as well as “A Youth Perspective on Crime” were also reviewed.

“As a student ready to leave [the C. F. Bryant] College in May, I am [keen] to hear new ideas and opportunities,” Renal said, agreeing with her fellow youth advocate, who said he wanted to hear the perspective of the guests in relation to crime, the continued development of the country and resources for young people.

Those topics were discussed and a question and answer segment ensued after the presentations. While some questions were directed to the panel of youth, many in the audience took the chance to engage the Government leaders.

Prime Minister Douglas touched on many points including the ongoing diversification of the economy, opportunities available to small businesses and new entrepreneurs, efforts to reduce crime and increasing commercial agriculture.

In thanking the scores of young people that participated at the event, the Prime Minister said that he remains convinced that “the [youth] have a very firm grasp of the challenges that the country faces “¦ and are prepared to provide some of the solutions.”

Deputy Prime Minister Condor highlighted the role of education to young people as a means of ensuring social and economic advancement. He also passionately articulated the increased role that parents must play in imparting positive values such as morality and discipline to their child/children. The White Paper, which was debated today (Thursday) in the Federal Parliament, was also discussed in great detail. The White Paper is a document that represents the vision for education development in St. Kitts and Nevis over the next ten years.

At the close of the evening, Renal and Tregenza were pleased with the proceedings.

Renal explained that hearing about the many scholarship opportunities was useful but it seems that the Prime Minister’s plea for persons to take advantage of openings to develop new companies/services was even more impactful.

“I heard many opportunities [in the] business sector,” Renal stated. “¦ “We need more innovative [companies/services] in society, she said, describing the more than two hour session as “very productive.”

Tregenza spoke directly to the Government officials encouraging greater use of the World Wide Web to promote services. He was grateful that the forum was held to allow such interaction with policy makers and quoted the words of popular dancehall performer Buju Banton and said “we must organize, centralize and come as one.”