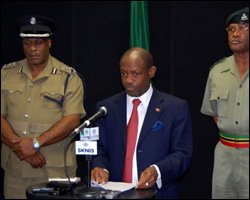 An EC$10,000 reward is been offered to persons giving information leading to the arrest and trial of persons involved in seven murders in the Federation for the year.

Prime Minister and Minister of National Security, Hon. Dr. Denzil L. Douglas, flanked by his Deputy Prime Minister and Minister of Education, Youth, Community and Gender Affairs, Information, Technology and Social Security, Hon. Sam Condor; Minister of Public Minister of Public Works, Utilities, Transport and Posts, Dr. the Hon. Earl Asim Martin; Commander of the St. Kitts-Nevis Defence Force, Colonel Patrick Wallace and Acting Commisioner of Police, Mr. Stafford Liburd, announced at a Press Conference Wednesday night, that the police and defence force have been fully mobilised, the vacation leave of all law enforcement personnel has been suspended and senior personnel on vacation have been recalled.

Dr. Douglas in the televised press conference, which was also carried live on several radio stations, gave residents his government’s assurance “to apply all resources at its disposal to counter deviant criminality and violence wherever and whenever they emerge in St. Kitts and Nevis.

He announced a monetary reward would be given to persons providing information which leads to the recovery of firearms, especially those used in the committal of any crime.

“We ask the public to provide information to 911 or 466-9279 ext 246 at the National Joint Headquarters,” said Prime Minister Douglas at the press conference following the double murder of two young men Wednesday afternoon.

Dr. Douglas gave the assurance that the information provided “will be treated with the highest of confidentiality.”

“There will be full mobilisation of the Police and the Defence Force throughout St. Kitts and Nevis. In this regard all vacation is suspended for both agencies of the security forces. All senior personnel on vacation are immediately recalled. Also all members of the Non-Commissioned Officers (NCO) ranks of the St. Kitts-Nevis Defence Force will be sworn in tonight (Wednesday) by the Acting Commissioner of Police with local constabulary powers thus providing assistance to the police,” Prime Minister Douglas announced.

He also announced that the Anti-Gang Unit, indentified in January will receive additional support from the Regional Security forces and beyond.

The Press Conference by Prime Minister Douglas followed an emergency Cabinet Meeting with the High Command during which a report of the developments the loss of life of four young men in the last two weeks were received. Two were killed Wednesday afternoon.

“Our intelligence indicated several months ago that the root cause of the homicides  that has been causing this federation much concern is gang-based,” said Prime Minister Douglass, who pointed out that on assuming the national security portfolio last August, he instructed full mobilisation of the security forces to implement aspects of the strategic plan specifically geared to gang-related crimes.

He said the FBI was consulted and a gang crime specialist to serve as an advisor to the Ministry of National Security was appointed.

“Let us remember the families in mourning. Let us remember all those who need our support and prayers at this particular time, especially during this time of grave and great challenge for all of us in St. Kitts and Nevis,” said Prime Minister Douglas.

St. Kitts and Nevis, he said has overcome serious situations in the past. “With God’s help and guidance and love and with the support of the communities and one and all, we as a proud and determined people of St. Kitts and Nevis, we shall overcome,” said Prime Minister Douglas.