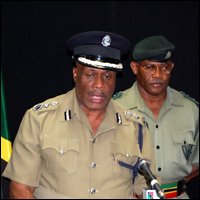 “Last year we seized some 31 firearms and 16 in 2007,” he disclosed at a news conference held by Prime Minister and Minister of National Security, Hon. Dr. Denzil L. Douglas.

The senior police officer encouraged the general public to continue to provide information to the police “so that we can successfully prosecute these offenders.”

At the press conference Prime Minister Douglas announced a monetary reward would be given to persons providing information which leads to the recovery of firearms, especially those used in the committal of any crime.

“We ask the public to provide information to 911 or 466-9279 ext 246 at the National Joint Headquarters,” said Prime Minister Douglas.

Dr. Douglas gave the assurance that the information provided “will be treated with the highest of confidentiality.”