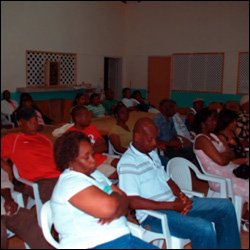 Legal adviser to the Nevis Island Administration (NIA), the Hon. Patrice Nisbett, has said the Nevis Reformation Party (NRP) led government is about the improvement of the quality of life in Nevis. He made the statement before a well attended Town Hall meeting at the Butlers Village Community Centre, Tuesday night.

Mr. Nisbett talked about the work done by the government during Phase III of the Island Main Road and his commitment to the people of St. James parish, even though he is not the elected representative of the area.

While discussing the numerous projects and programmes positioned by the government, Hon. Patrice Nisbett said, “We promised in our manifesto to finish Phase III of the Island Main Road and we have completed it.  I say to you people of St. James, that this government has demonstrated that a promise made is a promise kept!”

According to Mr. Nisbett, the roads were in such a deplorable state that one of the first things that the administration did when it came to power in July 2006 was to secure funds for new roads.  He also stated that not only did the government secure funds for the rehabilitation of the Island Main Road, but it also got a willing contractor who did the work at EC$20million, instead at an original estimated cost of EC$40 million.

During the meeting, the Legal Advisor expressed his obligation to the people of St. James as he informed the crowd that he had recently taken the Premier of Nevis, the Hon. Joseph Parry and the Minister of Communications and Public Utilities, Hon. Carlisle Powell to witness first hand, the dreadful conditions of the village roads in St. James.  Mr. Nisbett proudly said that he has received a commitment from his colleagues to work on those roads shortly.

While discussing housing, the Legal Adviser and Housing board member Mr. Nisbett, kept the participants well versed on his assurance of bringing more housing development to the people of St. James Parish. The government has already constructed affordable homes in St. James and has had homes built by the Nevis Housing and Land Development Corporation for ten persons in St. James on their own land.  He went on to say that Maddens, Garniers Estate and Rawlins Pasture are designated areas for more affordable homes.

For the duration of the question and answer period, people asked questions on a number of topics such as work permits, internet service for the community centre and land distribution. There were also high praises for the numerous projects and programmes put forward by the government. One participant even said, “Finally the people of St. James will have an excellent main road to drive and utilise!”