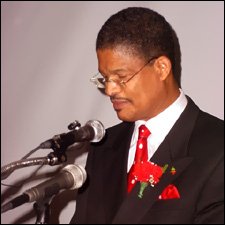 Dr. Somersall has accepted the invitation of St. Kitts and Nevis Prime Minister Hon. Dr. Denzil L. Douglas to speak at the 11th annual event, being held as part of celebrations to mark the 26th Anniversary of Independence.

The theme is “Embracing our youths today to ensure a brighter tomorrow.”

Dr. Somersall had the distinguished honour of being the Master of Ceremony at the 2006 Gala Award Presentations and Dinner which also marked the 25th Anniversary of Friends of Labour.

Following is the resume of Dr. Allan Somersall:

Doctor of Medicine, 1989, University of Toronto

Doctor of Philosophy (in Chemistry), 1973, University of Toronto

Master of Science, 1971, University of Toronto

M.Sc.: “Fluorescence and Energy Transfer in Aliphatic and Polyvinyl Ketones”, (U. Of T.1971)

“A New Passion For Living – The Art of Real Success”  by Commonwealth Publications, 1995.

“Breakthrough In Cell-Defense” – How to Benefit from the REAL Glutathione Revolution – by GOLDENeight Publishers, 1999