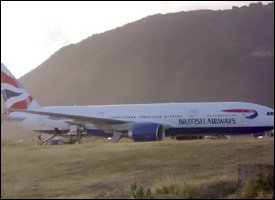 Although the second flight commences in March 2010, St. Kitts and Nevis Prime Minister and Minister of Tourism, the Hon. Dr. Denzil L. Douglas, has been invited by the British carrier to attend the launching ceremony in London, England, on Tuesday 6th October 2009.

BA officials have invited Prime Minister Douglas to make brief remarks at the London ceremony for the service which commences on Tuesday 23rd March 2010.

British Airways began its scheduled service on January 10, 2009 and has brought more than 4,000 passengers into St. Kitts’ Robert L. Bradshaw International Airport for the first half of this year.

“I speak for our key partners, our hoteliers and all stakeholders involved in the tourism industry in St. Kitts and Nevis in welcoming this excellent news from British Airways at a time when there is still uncertainty in the industry. We have developed an especially positive relationship with British Airways and we look forward to continuing this successful partnership long into the future,” said Minister of State in the Ministry of Tourism, Sen. the Hon. Richard Skerritt.

He expressed delight that British Airways has had the confidence in the future growth of tourism in St. Kitts and Nevis to bring in two new flights in just 14 months.

“The UK is increasingly becoming an important market for St. Kitts with British Airways bringing in more than 4,000 passengers in the first half of 2009 alone,” said Skerritt.