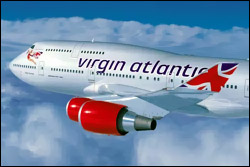 Virgin Atlantic Flights To The Caribbean

In a move that could result in fewer tourists coming to the region, American Airlines has announced that it’s cutting some of its Caribbean destinations.

The reason given: high fuel prices.

It’s a matter that clearly has the attention of governments and tourism industry officials in the region, where countries mainly rely on tourism.

AA has said that it will start charging US15 dollars for the first checked bag and will reduce US domestic flights.
Chairman and CEO Gerard Arpey also said that flights from New York and Miami to several, yet unnamed, Caribbean destinations are likely to be considered for the chop. He said the airline couldn’t afford to keep any routes that aren’t profitable.

Caribbean tourism ministers have been summoned to a special meeting next week to discuss the impact of possible flight cuts by American and other US carriers.
St Lucia’s Tourism Minister and Chairman of the Caribbean Tourism Organization, Allen Chastanet has already warned that the region should brace for a fall-off in holiday bookings.
The regional carrier Liat is also expecting a fall-off in international passengers.

Liat is making plans if things get worse. In addition to its regular inter-island travellers, Liat also ferries many international travellers between islands where there is no international airport.

The airline’s CEO, Mr Darby, said they will now have to review their business as a consequence of the new developments and warnings from the major airlines that the whole industry will have to be reshaped.
However, he says the Caribbean will continue to draw tourists from the US and Europe, despite the announcement by AA.
“There are a number of other airlines apart from American, that are serving the Caribbean, so I’m sure passengers will find the way down (here),” he told BBC Caribbean.