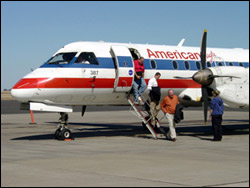 Fort Worth, Texas ““ AMR Corp
May 28, 2008
American Airlines today announced the first round of reductions to its flight schedule as part of its previously announced plans to reduce capacity in an effort to significantly reduce costs and create a more sustainable supply-and-demand balance in the market. The actions come in the face of skyrocketing fuel prices and a softening economy.

The initial changes to the flight schedule include, but are not limited to:

Customers impacted by the schedule changes will be contacted starting next week and re-accommodated on alternative flights.

In the coming weeks, AMR will continue to make additional schedule reductions in other markets and will assess the location- and route-specific impacts of those changes. This will be done to achieve plans to reduce AMR’s fourth quarter mainline domestic capacity by 11 percent to 12 percent compared to 2007 levels and its fourth quarter regional affiliate capacity by 10 percent to 11 percent compared to 2007. Fourth quarter consolidated system capacity is expected to decline 7 percent to 8 percent year over year, including the capacity reductions that were announced earlier this year.

To effect these changes, AMR plans to retire 40-45 mainline aircraft (mostly MD-80s and some Airbus A300s) and 35-40 regional jets. In an effort to significantly reduce costs, American Eagle also will retire its Saab fleet by the end of the year.

The new flight schedule with cuts should be announced by the end of the week.