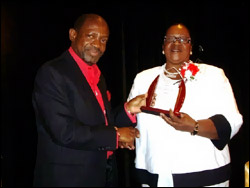 Mrs. Queeley-Liburd, the Labour Party’s candidate in the Nevis Local Elections in 1979 and the National Elections in 1980, was honoured for her “outstanding leadership in Politics and Business. For your courage and your pioneering spirit and for your being a good role model for the women of St. Kitts and Nevis.”

In accepting the award, Mrs. Queeley-Evelyn thanked Labour Women for the recognition and urged women of the St. Kitts-Nevis Labour Party to work hard to achieve their goals.

Born in New Castle, Nevis, Ermine is the first child of the late Elmond Queeley and Rosanel Queeley, both of Newcastle. She attended the Combermere School, and at an early age demonstrated a passion for business when she started, with the help of her mother, to make and sell coconut drops and frozen-joys to her classmates, teachers and others around the community. Her entrepreneurial spirit was encouraged by her father, himself a businessman, when he sent her abroad, at a very early age to gain more into the field business.

Ermine traveled to the British Virgin Island during the early 1970’s, where, rather than enrolling in classes as expected, sought employment in one of the large supermarkets on the island of Tortola. Her prowess in manipulating figures and her bright personality quickly earned her a job as a cashier. However, her constant yearnings to be near her parents and younger siblings forced her to return home only after a year and a half on island. On her return to Nevis, Ermine resumed her little business, this time expanding to sell fine cakes, local drinks and ice-cream. While operating her business, Ermine had the opportunity to travel extensively. On one such trip, while visiting relatives in the Netherlands, she was encouraged by her cousin to buy a few pieces of clothing to take back home to sell. This she did; and that was the birth of the now ever-popular Erms Fancy Store, one of the leading locally-owned stores on the island of Nevis, which sells toys, electronics and household items on the top floor and clothing, gifts and cosmetics on the ground floor.

During her years as a young businesswoman, Ermine won the hearts of many, through her kindness, often giving away her commodities at incredibly low prices. Her staunch commitment to her business and her undying services to her community did not go unnoticed.

She continues to lend her support to those who seek her advice. She has continued to serve her community in the area of business; and is also a board member of the Nevis Air and Seaports Authority (NASPA).

Ermine still lives in New Castle and shares her world with her husband Keith, three daughters, Karin, Shelley and Monique; one grandson, Keyon and a grand daughter, Monet.

She attributes her success to her faith in God, her strict upbringing and the strong support of her parents, her siblings, her relatives and close friends. She continues to bask in the trust that her community has placed in her and has pledged to continue to serve her people, as long as the Lord gives her strength.