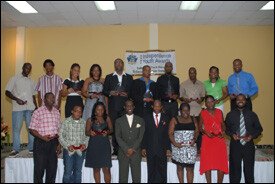 Larry Vaughn and Konris Maynard were awarded for Excellence in Music. Talissa Brown, Adrian Norford and Kayan Benjamin received recognition for Excellence in Sport. Awards in Education went to Dorothy Caines and Shorna Maynard while Alphonso Henry and Lawson Wilkes were highlight for their promotion of local culture.

Pastor Clive Saunders was recognized for Advocacy, Devon Mitchum and Crispin Worrel for Agriculture and Dameon Jacobs for Religion.

“When we think of these awards, we are indescribably happy and proud that our young people engage and excel in the various dimensions and disciplines of human endeavor, including sports, community activity, religion, education, science, culture, art, business enterprise, health, agriculture, social activism, journalism, and politics,” Deputy Prime Minister Condor stated. “These for me, embody and provide our State with inspirational, community and leadership qualities that are so critical to our overall development.”

Minister Condor, who is responsible for Youth Affairs added that his Government will “continue to allocate resources, as available, to individuals, groups, projects, programmes and activities that cater to the concerns of young people.”

He challenged the youth population to reject antisocial influences and to become involved in meaningful, positive activities that contribute to the development of the Federation of St. Kitts and Nevis.