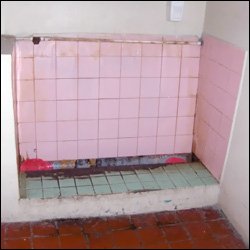 The Hon. Shawn Richards is maintaining that conditions at Camp Springfield are deplorable and that the soldiers ought not to have to work under those conditions. To bolster his claims one soldier is now speaking out and describing, in detail, some of the deplorable conditions taking place under Prime Minister Denzil Douglas’ watch at Camp Springfield. The soldier provided photographic evidence of a broken toilet and an unsanitary urinal to bolster his claims.

“The Coast Guard arm of the Defence Force was forced to dispose of a bread box that was destroyed by rats,” said the member who chose not to be identified for fear of retribution. “Soldiers know the kitchen is rat infested. Health inspectors visited the mess some months ago and said things need to change, but, nothing much has happened.” It’s gotten so bad that the cooks have to use personal funds to buy dish liquid and other cleaning materials.”

The member continued, “There are 6 toilets in the men’s quarters. Only two are operational and there are 44 men stationed there. You can see the pictures for yourself. It’s disgusting. It stinks and it can’t be healthy.

The member concluded, “There are soldiers right now that are suffering from mental problems. They need treatment and we need the conditions to improve.”

“I’m disappointed that the Prime Minister has yet to address these questions about Camp Springfield,” said Richards. “He is not above the law nor is he above answering legitimate questions of concern to our soldiers. Camp Springfield has fallen into disrepair under his watch and he’s responsible. It’s time for the Prime Minister to take responsibility for his failures.”