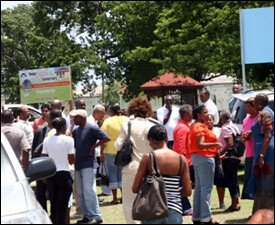 Outraged Citizens Outside Commission of Inquiry

A denied request by Queen’s Counsel Commissioner Thomas Sharpe, prompted a mass walk out by former Premier of Nevis Mr. Vance Amory and his supporters, from the first session of oral hearings at the Commission of Inquiry on Monday.

The denied request followed a short break and opening remarks from Commission’s Counsel Sir Richard Cheltenham which gave an insight into the Marion Heights Shopping Mall purchase, a matter the Commission had been mandated to investigate with regard to its purchase for use as government offices.

Commissioner Sharpe told Mr. Amory that the Inquiry was not about him but the issues in the terms of reference which surrounded the purchase of the Shopping Mall.

He explained that the Inquiry would take evidence from a number of people apart from him Mr. Amory.

Mr. Sharpe also advised the former Premier that he should to listen to the responses from questions posed to other witnesses and due to his distinguished position on the island, he would be given an opportunity to make a statement before he answered Counsel’s questions when his turn came on Thursday.

Mr. Farrell also testified that in his current capacity of Cabinet Secretary in the NIA, he had not seen any documents with regard to the Marion Heights purchase from the Cabinet’s records.

When asked for his opinion on the matter of purchase and the adequacy of the property, Mr. Farrell said in his view extensive restoration had to be done to the building because it was designed for a shopping mall; that the parking facility was inadequate; that the property was situated in a dangerous street corner and the size of the building was inadequate to facilitate the various activities it was earmarked for.

On the matter of the purchase of the property he said given the multi-million dollar price tag, the matter should have been brought to Cabinet by way of a Submission because there was not an Appropriation Warrant and at that time Mr. Amory was also the Minister of Finance and Education.

Other witnesses were professional Architect Mr. Billy Claxton, who at the time of the Marion Heights Shopping Mall purchase, served in the Public Service as an Architect at the Public Works Department. He was responsible for the management and design of small projects.

Mr. Claxton distanced himself from a valuation of the property since he was not aware of the imminent purchase of the building and was not formally asked for a professional costing.

Evidence was also heard from private contractor Mr. Hewlette Williams who worked to convert the shopping mall to office space after it was purchased by the NIA and a private Registered Property Manager, Senior Certified Valuer from the International Real estate Institute in the USA and Chartered International Consultant Mr. Hastings Daniel.

The second day of oral hearings will commence on Tuesday from 10am, with six witnesses who were invited to give evidence to the Commission.