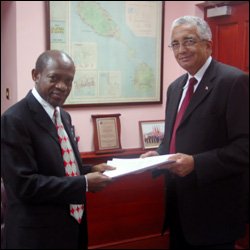 The Republic of Cuba has posted its first ambassador of African descent to the Federation of St. Kitts and Nevis.

Dr. Douglas said he hopes that the new ambassador’s tenure will “consolidate the existing excellent relationship between St. Kitts and Nevis and Cuba.”

“Your task has been made much easier because of the good relationship that exists,” Prime Minister Douglas told the new Cuban diplomat.

Dr. Douglas described the currents times as “exciting as the economic transformation of St. Kitts and Nevis continues.”

He gave Ambassador Payret the assurance that St. Kitts and Nevis will continue to show solidarity and support for Cuba and will “continue to be a voice for Cuba at international fora.”

Ambassador Payret, who presented a copy of his credential to Prime Minister Douglas, in responding to the words of welcome noted that he has been told in Cuba that his successor Ambassador Ana has been doing a good job.

He said since his arrival he has met with the local Cuban Health brigade, working mainly in the health sector.