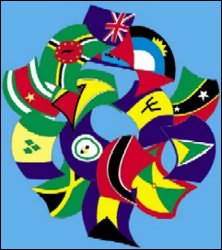 Flags Of The CARICOM Countries

During several meetings held in St. Kitts last week, 15 youth from St. Kitts and 10 from Nevis, were briefed on what the exchange of a total of 225 CARICOM-member state representatives would entail.  In speaking to the St. Kitts and Nevis Information Service, exchange participant Rohanda Divent said when participants travel to St. Lucia, they will have to take note of any challenges including stigma.

Similarly, Kelvis Alford said the exchange could be considered a pilot programme to learn about St. Lucia and give feedback on how well CSME can operate, the effect on St. Lucia and the region as a whole.

He noted that quite a few young people had been screened including young people interested in teaching, nursing, technical vocations and hospitality from the high schools and the Clarence Fitzroy Bryant College.

Mr. Woods said that while the students from St. Kitts and Nevis would be travelling to St. Lucia, St. Kitts would be hosting students from Barbados.  He explained that the Barbadian students would be visiting Minister responsible for CARICOM Affairs Dr. Timothy Harris and departments including Customs and Immigration.

Commercial Banks and the Eastern Caribbean Central Bank would also be on the itinerary.

Salas Hamilton, CSME Specialist in Communications, who played an important explanatory role in the meetings held with the students, explained that regional integration is key, in terms of increasing local markets and giving the region a larger voice on the international scene.  He mentioned that there will always be challenges in any process and one has to look at the possibilities.  Mr. Hamilton mentioned that already Caribbean nationals were benefiting and creating their own businesses and opportunities.

In agreement, Mr. Woods revealed that a similar regional exchange had occurred last year that resulted in several young people from the Federation obtaining jobs in the territories which had been visited.