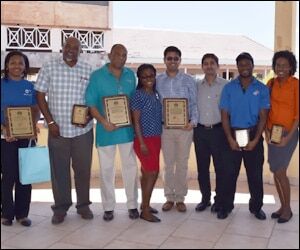 In recognition of World Consumer Rights Day (WCRD) 2016, the Ministry of Consumer Affairs scheduled a week of activities under the theme “Antibiotics off the Menu“ which ran from March 13 to 18.

Vincent Fough, Consumer Affairs Officer, stated that the week not only focused on the main theme but assured the public that government agencies, particularly the Department of Consumer Affairs, are working assiduously to ensure that the food, medicine and other products that are used by consumers are of acceptable safety standards and are fit for their intended purpose.

One of the highlights of the week was on Thursday (March 17), where several businesses were awarded for their generous donations and continuous support.

Another highlight was the appearance of Mr. Fough on this week’s (March 16) edition of “Working for You.” Areas addressed included consumer rights and responsibilities and the role of the department.

Throughout the week, Mr. Fough explained to the public that it was discovered a number of years ago that small doses of antibiotics administered to animals daily would cause most of them to gain as much as three percent more in weight than would occur naturally. He further explained that the antibiotics are normally used to treat human illnesses. He noted that over time bacteria living in animals treated with certain antibiotics would become resistant to the drug which can be ingested by persons due to improperly cooked meat.

“Outbreaks of illnesses in humans would no longer respond favorably to antibiotic treatment,” he said. “Control over growing levels of drug resistant bacteria has led to a ban on sub therapeutic use of antibiotics in livestock in many European Union countries and Canada.”