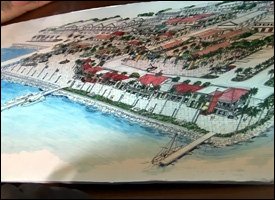 The Charlestown Waterfront and construction workers on Nevis stand to benefit from the proposed redevelopment of Nevis’s Bay Front.

Premier of Nevis and Minister of Tourism Hon. Joseph Parry met with New York based developers Namdar Brothers Realty recently, who gave him the assurance that the Charlestown Redevelopment Plan would provide employment for Nevisians at the construction and conclusion stages.

Mr. Parry welcomed the project citing that it would also complement Nevis’ tourism product, an area which the Nevis Island Administration (NIA) has placed much emphasis.

“We have planned as a government to try to ease the impact of the recession in the States by doing things on the ground and so far we have been successful.

“We have provided employment for quite a lot of people and we want to continue to do so through these activities so we want to avoid any unnecessary delays we want to move as fast as you can,” he said.

The project will be executed in phases and Iraj Nambar explained that Phase 1 was projected to be completed in 12-15 months once ground was broken.

During the first phase, the entire water front, left of the Iron Shed will be redeveloped.

According to Nambar, the project would be sensitive to the ISPS requirements in front of both the piers and the ticket booths would be redesigned and transformed into an indoor facility that would also house duty free shops.

“We are going to start with the Customs Building [warehouse]”¦ The idea would be to develoop a brand new structure”¦You will have a brand new development in thhe centre of town as well as the waterfront. Phase one will include the strip of street which is called Market Street for the design purposes to be cobbled stone.

“It will be a pedestrianised street where there will be tables and chairs and landscaping and it will not affect traffic. We believe this will bring people to the area to walk around and enjoy it,” he said.

The area will also include cafes, coffee shops and ice cream stores.

Namdar Brothers Realty was also the developer for Port Zante in St. Kitts.