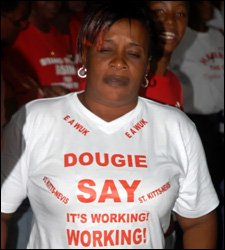 Several changes to the electoral laws of St. Kitts and Nevis by the People’s Action Movement (PAM) in 1984 were done in Cabinet and not the National Assembly.

This was disclosed Sunday by former Speaker of the St. Kitts and Nevis National Assembly, Ms. Marcella Liburd at a public meeting at which she exposed the hypocrisy of PAM, which is opposing legitimate electoral reform legislation.

“On the 15th of March 1984 in Cabinet, they changed the electoral regulations. On the 31st of March 1984, they were published in The Democrat (party organ) ““ that’s how the public was informed. Then on April 19th 1984, they went back to Cabinet to amend the same regulations that were made on 15th March. Then they went back to Cabinet on May 28th 1984 and amended what was done on March 15th 1984. So in three months time, they amended the regulations,” said Liburd, a lawyer and former teacher.

“How much public discussion did the then People’s Action Movement (PAM) Government of Prime Minister Dr. Kennedy Simmonds had?” asked Liburd, a former senator in the law making body. She disclosed that even after the National Assembly was dissolved in June 1984, there were no polling divisions for the general elections.

“The polling divisions were gazetted on the 4th of June 1984, three days after the National Assembly was dissolved on June 1st 1984 and elections set for 21st of June,” said Liburd.

“These are the people who are now telling you that there is not enough time to prepare for the next general election,” said Ms. Liburd.

She said the Political Leader Mr. Lindsay F. P. Grant and his People’s Action Movement (PAM) “cannot be trusted. Do not be deceived.”

Ms. Liburd, the Labour Party’s Central Basseterre candidate, who is seeking to replace former Minister of National Security, Labour and Immigration, the Hon. Dwyer Astaphan, as the Parliamentary Representative in the National Assembly, said the PAM, which in government from February 1980 to July 1995, changed the constituency boundaries in 1984 and 1989 just before elections in those years.

The realignment of the constituency boundaries is part of the Electoral Reform Process which began in August 2006 and has resulted to date in a new Register of Voters, the issuance of National Identification Cards to each registered voter and the tightening of legislation governing the electoral process.