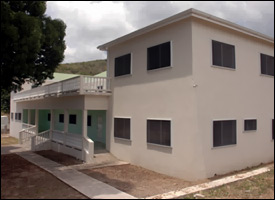 Residents of Challengers, Stonefort and Stonefort Heights will take possession of their new multi-purpose centre on Tuesday.

The building, financed by the Republic of China on Taiwan, will be officially opened during a ceremony starting at 5:00 PM at the Challengers Multi-Purpose Centre. The Community Centre is on the top floor and the Day Care, Toddler and Pre-School sections on the ground floor.

The Ceremony will be chaired by Mr. Cuthbert Caines and includes the Welcome by Director of Community and Social Development, Ms. Jovil Martin;  an overview of the project by a representative of the Public Works Department. Remarks will come from the Co-ordinator of Early Childhood, Mrs. Vanta Walters; Ambassador of the Republic of China on Taiwan, His Excellency Rong Chuan Wu; Deputy Prime Minister and Minister of Education, Hon. Sam Condor and Prime Minister, Hon. Dr. Denzil L. Douglas.

Minister of Health, Social and Community Development and Gender Affairs and Parliamentary Representative, Hon. Rupert Herbert will officially open the Centre. The Vote of Thanks will be given by Mr. Glenn “Ghost” Phillip.

A group from the Girl’s Brigade will dance, Nekisha Frazier will say a poem and the ribbon will be cut by senior resident, Ms. Janet Hazel.