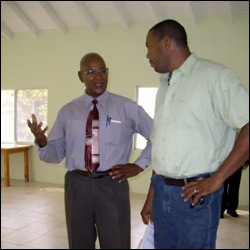 The soon to be opened Challengers Multi-Purpose Community Centre is vital to the educational, sporting and human development of the young people in particular and residents in general.

Community and Sports activist Mr. Glenn “Ghost” Phillip said the new facility will be used to house a gym, a library and computer centre as well as resurrect and improve several sporting events in the area.

Expressing thanks and appreciation to the Methodist Congregation for the use of their Church Hall as a meeting place for several decades, Mr. Phillip said it was at that facility that he and several other villagers learned to play dominoes and other games.

“This community centre is modern and what I would like to see taking place from this new community centre is a Challengers football team going to the Premier Division as well as the establishment of a gym. At present, we are sourcing a 65-inch television screen to be used to educate our young people in several sporting disciplines and for other educational purposes,” said Phillip, who has been tapped to succeed the Minister of Health, Community and Social Development and Gender Affairs, Hon. Rupert Herbert, as the St. Kitts – Nevis Labour Party’s Parliamentary Representative for Constituency #4.

Mr. Phillip said the Challengers Table Tennis Team has been part of the National Table Tennis Association “but lack a facility to practice.”

“We intend to resurrect table tennis and other sports and this new community centre will go a long way in ensuring that these and other goals, including harnessing the energies of our young people into creative and self-developing activities,” said Phillip.

“Our youth must utilise this facility for educational and recreational purposes so that they can channel their energies towards positive events helpful to themselves, their community and nation,” added Phillip.

He disclosed there is a proposal for a library and a computer centre to be established. “The computer centre is not going to be only for those who are already computer literate, but also those who have difficulty in accessing the internet in their own homes. We will afford them the opportunity to come to the centre and use it to complete assignments and enhance their educational capacity,” said Phillip, who joined St. Kitts and Nevis Prime Minister Hon. Dr. Denzil L. Douglas; The Republic of China Resident Ambassador to St. Kitts and Nevis, His Excellency Mr. Mr. Rong Chuan Wu; Minister of Health, Community and Social Development, Hon. Rupert Herbert and other government officials on a tour of the Taiwan-financed Challengers Multi-Purpose Centre.