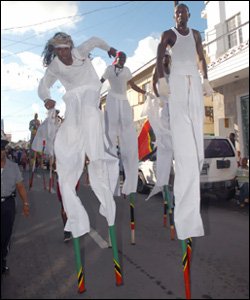 The high spirited and energetic performances of the Sandy Point-based Chagredandies Moko Jumbie group are well known in St. Kitts-Nevis and neighbouring territories where they perform. That reputation is growing, and has members of the group walking on air.

Last week, a film crew captured the stylistic and rhythmic dances of the folklore group to include in a promotional video to be aired around the Region. The Caribbean Airlines LIAT commissioned the filming that took place at The Circus, against the backdrop of the historic Berkeley Memorial in the capital Basseterre.

The video compilation will highlight the unique culture, people and popular places in various islands.

Now that they have had their camera close up, the group is preparing to travel to St. Maarten for the 5th Annual Boardwalk Mas.

Lorna “˜Ava’ Henry of the Department of Culture is responsible for folklore groups. The dance specialist told SKNIS that the moko jumbies are extremely popular in the Dutch territory and have become regulars at the annual celebrations having represented the twin-island Federation at four of the five festivals.

Organizers specially request the appearance of the group and cover all associated costs.

The talents of the stilt walking Chagredandies Moko Jumbie group have also been requested in Bermuda, an opportunity that members said will provide a memorable experience.  The Department of Culture has informed that the local group has been invited to participate in the Bermuda Day Parade on Sunday, May 25. While there, the locals will share the stage with a moko jumbie troupe from the Republic of CÃ´te d’Ivoire (Ivory Coast) in West Africa.

The moko jumbie traditional dance originated in Africa as did many other folklore customs. Students in Bermuda will no doubt be told about the history and other secrets of the folklore tradition during workshops which members of the St. Kitts and Nevis troupe is expected to facilitate.

The Chagredandies leadership has thanked the Department of Culture in St. Kitts for assisting with the forthcoming activities in St. Maarten and Bermuda.

Ms. Henry indicated that the Ministry of Tourism, Sports and Culture was proud of the partnerships it has with many agencies and individuals. She added that “even though their is a world wide recession, the fact that our local folklore groups are still being invited to take part in these sessions are testimony of how highly regarded they are outside of the Federation.