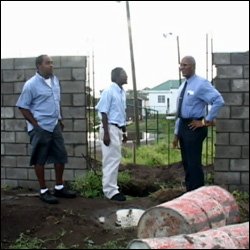 The upgrade of the Half Way Tree Sporting Complex is proceeding well and should be finished in a matter of weeks.

That assurance was given to the Parliamentary Representative for the area Honourable Rupert Herbert by contractor Keithroy Dyer of Ali’s Construction. He made the statement on Thursday, after conducting a tour of the ongoing work.

Minister Herbert spoke to SKNIS after the tour and said that he was “delighted” to see the progress of work at the facility which is slated to be completed in June. He noted that a major concern of water spilling onto the field from a nearby ghaut has been addressed.

“We have made provisions to [prevent] that by building a substantial soakaway,” he said, which should redirect the water from the facility. Minister Herbert added that this was strategically done to boost the enjoyment of games, safety of players and spectators and to preserve the field.

The entire complex is also being fenced under this upgrade project, as is the renovation of the pavilion. Minister Herbert commented that he was eagerly anticipating the new, comfortable facilities particularly those of the pavilion which is being significantly overhauled with a complete paint job and installation of new counters, toilets, windows and the like.

“I am really looking forward to the day when I can come to Half Way Tree and enjoy a good football match between the young people of the area,” he commented, while expressing appreciation to the contractor, the Ministry of Tourism, Sports and Culture as well as the Public Works Department for their efforts toward the programme.