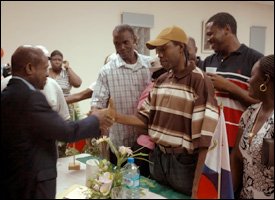 Nationals residing in the British and United States Virgin Islands get the opportunity to hear first-hand from St. Kitts and Nevis Prime Minister Hon. Dr. Denzil L. Douglas next week.

Prime Minister Douglas, who will be in Tortola, British Virgin Islands to attend the 49th Meeting of the Authority of the Organisation of Eastern Caribbean States (OECS) will meet with nationals of St. Kitts and Nevis on Wednesday 21st May.

The meeting will be held in the Brumant Fellowship Hall of the New Testament Church of God, Baugher’s Bay at 7:30 P.M.

Prime Minister Douglas is expected to update nationals from the twin-island Federation on the impact the international economic and financial crisis is affecting the nation.

He is also expected to highlight the challenges faced as a result of the international situation and discuss the achievements in the social, economic and political arena.

The governing St. Kitts-Nevis Labour Party has always included nationals in the disapora in the decision making and shaping of policies aimed at enhancing the quality of life.

The Prime Minister and other Ministers of the Cabinet have always made it a priority to meet with Kittitians and Nevisians as well as national associations in town-hall style meetings when visiting the various capitals on official business.

The two meetings next week will bring to four the number of meetings with nationals in the diaspora in recent weeks. Meetings have been held with nationals in Toronto, Canada and New York. A series of eight Town Hall Meetings by Prime Minister Douglas concluded on Tuesday in West Basseterre.