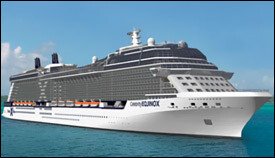 From November 2009, the 122,000 gross ton Celebrity Equinox will arrive in the region for a series of 10-and 11-nightUltimate Caribbean voyages through April 2010.

The company took possession of the US$750 million Celebrity Equinox last week and it is now undergoing a series of inspections before its formal naming during ceremonies on July 29th and service on July 31st.

It will then embark on a series of cruises that will take it on a 10-night Norwegian Fjords cruise and 13- and 14-night Ancient Empires before sailing on its transatlantic voyage to Fort Lauderdale, Florida to begin the Ultimate Caribbean voyages through April 2010.

The Equinox sleek exterior and critically acclaimed interior design won’t be the only features raising eyebrows among cruise and travel enthusiasts. Playing off the success of the launch of her sister ship, Celebrity Solstice, which made several calls to St. Kitts during the 2008/2009 season, the newest vessel in Celebrity’s fleet will also offer AquaClass staterooms designed to offer a soothing, spa-focused ambiance, as well as several indulgent new offerings in the onboard spa.

AquaClass is the only stateroom category in Celebrity’s fleet that offers no third and fourth guest berthing, making the area quieter and more exclusive for guests wishing to relax in an utterly serene environment.

AquaClass guests enjoy in-stateroom amenities that include a pillow menu featuring Swedish Isotonic, body and hypo-allergenic pillows; carafes of unsweetened iced tea; soothing, calming lavender oil in a reed diffuser; and a five-jet shower by Hansgrohe, designed to invigorate and relax. AquaClass guests on Celebrity Solstice have been enjoying the convenience of accessing free, exclusive, on-demand video programming that introduces them to wellness-themed activities such as meditation, yoga, etc., in the comfort of their stateroom.

AquaClass will comprise 130 of the ship’s 1,426 staterooms. A full 85 percent of all staterooms on Celebrity Equinox will have verandas, and all staterooms will be equipped with flat-screen TVs, smarter storage and closet space, spacious bathrooms, and plush European bedding. The ship will offer wireless Internet access throughout.