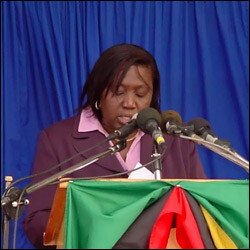 A senior Ministry of Foreign Affairs official in St. Kitts is hailing as successful, the Seventh Session of the St. Kitts and Nevis-Cuba Joint Commission for Economic and Technical Cooperation.

“This engagement was certainly more than another bilateral session but rather a meaningful dialogue that was designed to deepen existing cooperation and forge closer cooperation in areas of agriculture, health, tourism, culture, sports, social and community development, higher education and disaster management,” said Permanent Secretary in the Ministry of Foreign Affairs, National Security and Immigration, Mrs. Astona Browne.

In her opening remarks, the Permanent Secretary said the joint session is a clear demonstration of an enhanced mechanism of partnership that reflects a commitment to economic, cultural, social and technical development and sustainability between Basseterre and Havana.

Mrs. Browne applauded the Government of the Republic of Cuba for its consistent and tangible contributions to the economic and social development of the people of St. Kitts and Nevis and reiterated the commitment of Prime Minister Hon. Dr. Denzil L. Douglas and his Labour Party Administration to preserve and strengthen the close bonds of friendship and cooperation.

The Cuban Delegation was led by Vice Minister His Excellency Orlando Requeijo Gaul highlighted the development of bilateral cooperation since 1998 and the important contribution of the Joint Commission in this regard. He expressed his conviction that the agreed plan for collaboration will continue in an atmosphere of mutual respect and understanding.

While in Havana, Mrs. Browne also met with the acting Deputy Minister of Foreign Affairs to activate an agreement signed in 2000 between the Ministries of Foreign Affairs of both our countries on the Establishment of a Bilateral Consultation and Coordination Mechanism.

A communiquÃ©, signed during a brief ceremony at the end of the meeting, signals the firm commitment to the projects and initiatives that will be realized during the year between St. Kits and Nevis and Cuba.