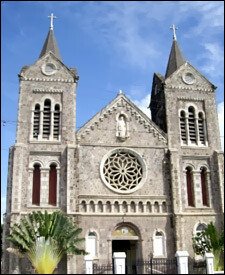 An Awards Dinner, a Jubilee Eucharist and Celebration of Confirmation are among activities planned to mark the 150th Anniversary of the Immaculate Conception Co-Cathedral in St. Kitts.

The Awards Dinner is planned for 6th December 2008 at the Royal St. Kitts Hotel at which 70 parishioners will receive awards for their contribution to the parish over the years and several others will receive Certificates of Appreciation for their current services to the Parish.

Tickets are on sale at EC$150 for adults and EC$75 for children up to 12 years old can be purchased at the Parish Centre or from members of the Parish Council.

The Celebration of Confirmation will be on Sunday December 7tyh and the 150th Jubilee Eucharist will be held on Monday December 8th.

A special epitaph to the late organist Mr. Vincent Prince and late Sacristan Mr. basil Henderson will be unveiled in the back of the Church by Bishop Gabriel Malzaire.

According to church information, in 1858 Fr. Phillip Lynch was officially appointed as the first parish priest of St. Kitts. This date marks the official establishment of the canonical parish on the island.