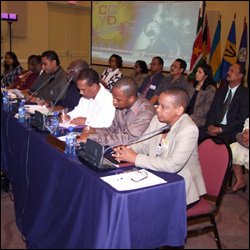 The youths of the Caribbean must continue to champion their rights and responsibilities in shaping a better future for themselves and the generations to come.

This was the message from St. Kitts and Nevis Prime Minister Hon. Dr. Denzil L. Douglas, who is of the view that a solid programme for youth development in Haiti could be the most outstanding contribution yet by the CARICOM Youth Ambassadors.

He is also suggesting that a representative of the CARICOM Youth Commission should be invited by the CARICOM Secretary General to make a presentation to the annual meeting of CARICOM Institutions.

In a video-taped message to the just-concluded CARICOM Summit on Youth Development in Suriname, Prime Minister Douglas regretted his absence as the Summit coincided with the January 25th general elections in St. Kitts and Nevis, which resulted in victory for the St. Kitts-Nevis Labour Party for an unprecedented fourth term.

Dr. Douglas commended the Commissioners of Youth Development for their seminal work and in particular, for the analyses and the recommendations which must be seriously addressed by the Heads and Ministers of Government as well other stakeholders, including the private sector and the development partners.

Prime Minister Douglas, CARICOM Lead Head for human resources, health and HIV/AIDS told the youths that the Commission’s report refers to the important need to strengthen the capacity of the youth through training and knowledge and skills building.

“It also recommends that greater attention be paid to revamping the curricular in schools as well as to the underachievement of males. These resonate with the recommendations that I have presented to our Heads from time to time out of the decision from the Council of Human and Social Development,” said Dr. Douglas.

He is of the view that as a follow up to the Commission’s Report, a representative of the CARICOM Youth Commission should be invited by the Secretary General, Caribbean Community to make a presentation to the annual meeting of CARICOM Institutions with a view to sensitizing the relevant ones like CXC, CAREC, CEDMA, UWI and other Universities on the need to focus their attention on the relevant youth development priorities.

“These institutions are at the core of functional cooperation in the Community This is one mechanism that could ensure that there is collaboration with policy institutions with direct links to our Councils and decision making organs of the Community,” said Prime Minister Douglas.

In his address, Dr. Douglas referred to the Report of the Caribbean Commission on Health and Development that the highest mortality rate for HIV is among those between 15 and 35 years.

“Again this problem may be alleviated somewhat with continued and strengthened linkages between the CARICOM Youth Ambassadors corps and the Pan Caribbean Partnership Against HIV/AIDS that coordinates a robust programme of work in this area and whose emphasis in the current Regional Strategic framework on HIV and AIDS 2008-2013 is on universal access to HIV prevention, care and treatment,” Dr. Douglas stressed.

On the issue on crime and violence and the implications for youth in the region, a major concern in the Report, was the subject of a Summit held in St Kitts and Nevis in June this year

“The highlights of incidences of youth violence including violence against young women are unacceptable if we are to grow societies that would to fulfill the hopes and aspirations of our youth, build viable economies which your report so passionately advocates. I am therefore once again commending to your attention the new programme on crime prevention in the work programme of the Caribbean Secretariat for this year to which the Caribbean Youth Ambassadors corps must be aligned. In this way our youth would be part of the solution that this region strives to achieve,” said the St. Kitts and Nevis leader.

Prime Minister Douglas also referred to several others areas including the fight against Non- Communicable Diseases, against illicit drugs and guns, for responsible use of alcohol drugs and for an infusion of civility in our relations within the family, school, workplace and local communities, in which the youth can become involved.

“In this regard a solid programme for youth development in Haiti could yet be the most outstanding contribution yet by the CARICOM Youth Ambassadors and the youth movements in the Community can make NOW and I commend this for your urgent consideration,” said Prime Minister Douglas.