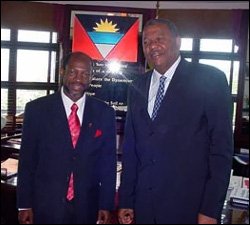 Antigua and Barbuda’s Prime Minister Dr. the Hon. Baldwin Spencer has told St. Kitts and Nevis Prime Minister Hon. Dr. Denzil L. Douglas that his fourth-term election victory is a clear testimony of the confidence of the people of the twin-island Federation.

“To have emerged victorious in four consecutive general elections is clear testimony to the confidence the electorate of St. Kitts and Nevis has in you and your Party’s stewardship,” said Prime Minister Spencer in a congratulatory message to Prime Minister Douglas, whose St. Kitts-Nevis Labour Party received 60 percent of the votes cast on St. Kitts.

Dr. Douglas received the assurance of Prime Minister Spencer of Antigua and Barbuda’s “commitment to maintaining and strengthening the relations between St. Kitts and Nevis and Antigua and Barbuda as we move forward in forging our unity at the level of the OECS.”

Former Prime Minister of Jamaica, the Most Honourable, P.J. Patterson in congratulating Prime Minister Douglas said the people of St. Kitts and Nevis have expressed their appreciation of his efforts towards their development.

“I wish you and your team every success as you pursue your set goals, with unrelenting determination, especially in these challenging times,” said Mr. Patterson.

Pan-American Health Organisation (PAHO), Ambassador His Excellency Dr. George Alleyne expressing congratulations on his own behalf and all those who have some stake in Caribbean health, wished Prime Minister Douglas “every continued success.”

President of the St. Kitts and Nevis Hotel Association Mr. Nick Menon and Manager Mr. Michael Head in congratulating Prime Minister Douglas on his fourth consecutive election victory said the HTA “looks forward to working closely with you in the future ion issues that are important to our valuable tourist industry.”

“The good people of St. Kitts and Nevis have spoken and acknowledge that you are indeed a leader that will best serve the nation during these difficult economic times and continue to steer it toward a course of peace and prosperity,” said St. Kitts and Nevis’ Honorary Consul General in Miami, Florida, Mr. Brian E. Keeley.