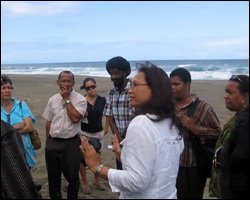 St. Kitts and Nevis is among four English-speaking countries in the Caribbean who are preparing proposals to send to UNESCO in order to be the first in the region to have registered biosphere reserves.

In the company of the Federation is Jamaica, Dominica and St. Lucia.  All countries are working toward an April submission deadline, when in the case of St. Kitts and Nevis, all necessary details of the Keys Beach area would have been compiled and arranged in the requested format for the nomination form for UNESCO’s Man and the Biosphere (MAB) Programme.

In preparation for this, two UNESCO officials Ms. June Marie Mow Robinson and Everton Hannam visited the Federation.  Ms. Robinson who is a member of the UNESCO advisory board in the MAB Programme, facilitated two sessions.  Monday, February 23rd at the Mini-Zoning Workshop Ms. Robinson actively demonstrated the function of a biosphere reserve noting that it was not defined in the traditional sense of the word reserve.  She revealed that the biosphere reserve is an area where certain sections may have the benefit of full protection yet people are allowed to carry out traditional work as well as dwell in the area.  The area is managed/monitored by residents of the community who determine if, when and how often traffic is allowed into the area.  The biosphere reserve consists of a core zone, a buffer zone and a cooperation zone.  Participants were also invited to create draft boundaries for the proposed biosphere reserve on the Keys Beach area.

Tuesday, February 24, there was a planning session designed to set clear goals for submitting the nomination form and set up a committee to facilitate the process.

Mr. Hannam who is the Secretary General of Jamaica’s UNESCO National Commission noted that his country may be ahead of St. Kitts and Nevis in the nomination process because of an earlier start but said he was impressed with the enthusiasm displayed by workshop participants.  This he said should be the stimulus to complete the nomination by the stated deadline.

Another objective of the visit by the UNESCO officials was to meet and consult with key government officials.  As such, Antonio Maynard Secretary General of the St. Kitts and Nevis UNESCO National Commission escorted Ms Robinson and Mr. Hannam to meetings with Deputy Prime Minister Honourable Sam Condor, Minister responsible for UNESCO; Honourable Cedric Liburd Parliamentary Representative for the Keys area; and Mrs. Hilary Hazel, Permanent Secretary in the Ministry of Sustainable Development.

At the conclusion of the visit’s activities, Ms. Robinson informed the St. Kitts and Nevis Information Service that the objectives of the trip had been met and there seemed to be enthusiasm on the part of workshop participants and support for it from the governmental end.  She explained that from what she had observed, St. Kitts and Nevis should have a good proposal ready for April this year.

The representative of the UNESCO Advisory Board emphasized that because this undertaking was new to the English-speaking Caribbean, there were some new things that would be learnt.

She emphasized that the creation of a biosphere reserve was a cooperative process that involved dialogue between the public and private sectors, community leaders and government as well as community leaders and business leaders.  It was noted that it was important to involve youth.  Ms. Robinson described the Keys Beach site as very interesting due to its various features including the beach, sea, coral reef and mangroves all in area where people live and work.