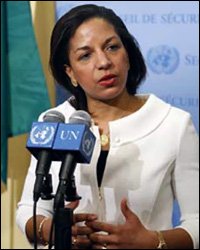 Climate change and the global financial and economic crises were among issues discussed last week between Caribbean and United States diplomats at the United Nations.

The meeting, regarded as a very frank and candid exchange, also discussed the Arms Trade Treaty and the Permanent Memorial of the Abolition of the Slave Trade and Slavery.

The general consensus was a desire to work together, to respect each other’s views, and to bridge the divides that remain on these issues.

It was clear that differences remain on the climate change negotiations. However Ambassador Rice stressed that climate change is extremely important to the Obama Administration, and the cooperation with island states and the most vulnerable, was key to moving forward.

There was genuine support for finding initiatives to assist middle income small island developing states to counter external shocks, and strong commitment to finding areas of cooperation on the Arms Trade Treaty including Small Arms and Light Weapons.

The USA was thanked for their continued support to the Slave Trade Memorial which was a CARICOM initiative.

The Meeting was viewed by all participants as very constructive, and Ambassador Bart was thanked for initiating this first in a series of discussions between CARICOM and the United States at the UN.