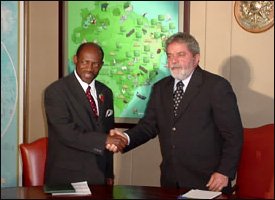 Brazil is to open an embassy in the Federation of St. Kitts and Nevis and three other Caribbean nations.

Permanent Secretary in the Ministry of Foreign Affairs, Mrs. Astona Browne on Thursday afternoon confirmed an Associated Press report that the Federal Republic of Brazil in South American has indicated an interest in expanding its growing ties with St. Kitts and Nevis.

The AP report said Brazil will install embassies in St. Kitts and Nevis, Antigua and Barbuda, St. Vincent and the Grenadines and Dominica but gave no dates when the facilities will be open.

Brazil has a non-resident Ambassador accredited to St. Kitts and Nevis. His Excellency Orlando Oliveira is based in Trinidad.

Brazil’s Press Office in the Ministry of Foreign Affiars said the opening reflect the growing relations between Brazil and the Caribbean and Central American nations.