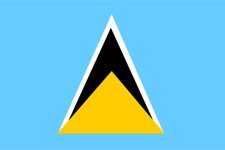 He said St. Lucia boasts a history that celebrates and embraces the diversity upon which the Island’s culture was established.

“The theme “A Journey to be Proud of. A future to look forward to” is certainly appropriate as it serves to remind all Saint Lucians that much has been accomplished since independence, and even better rewards await,” said Dr. Douglas, adding: “It is my fervent hope that your country will continue to be blessed with peace and prosperity.”