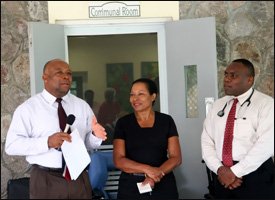 Senior citizens at the Flamboyant Nursing Home in Charlestown, Nevis, were the recipients of a gift which would assist with their care.

The Canada based charity the St. Kitts and Nevis Circle of Care, made the donation to Minister of Health Hon. Hensley Daniel through its Vice President Mrs. Lynette Liburd on Thursday.

During the presentation Mrs. Liburd explained that the non-profit, non-denominational and non-political organisation aimed to enhance the quality of the life of the seniors of St. Kitts and Nevis. She said they had raised funds in 2008 and had been fortunate to have had very generous contributors who provided wheelchairs, walkers and a variety of other items to make the lives of the seniors more comfortable.

Mrs. Liburd thanked Minister Daniel on behalf of her organisation for having facilitated the seamless process to have the items shipped to Nevis.

She also noted that the organisation’s focus was centred on seniors in both Nevis [the Flamboyant Nursing Home] and St. Kitts and they hoped to reach out to the seniors in the community as well. Their next fund raising activity was scheduled for April.

Meantime, Mr. Daniel registered his thanks to the organisation on behalf of the government and people of Nevis and more so the Ministry of Health for their interest in the seniors.

He said the Nevis Island Administration (NIA) took the phenomenon of aging seriously and had raised the profile of seniors to a level in which it expected people to have no difficulty with the natural process of aging.

Notwithstanding he said there was a natural tendency for the organs in the body to wear out as one grew older and the wheelchairs and other equipment donated by the St. Kitts and Nevis Circle of Care would help the seniors remain mobile while the natural system faded.

Mr. Daniel explained that in Nevis, the contribution of the elderly was regarded as significant and therefore, they were owed a debt of gratitude for their service. He welcomed the Organisation for its partnership with the NIA to ensure the continued development of the elderly on the island.

“The greatest appeal of an organisation like Circle of Care for St. Kitts and Nevis based in Canada is that some day all of us will require the help of others. So perhaps the best thing to do now is to invest in the care of others so that when you reach that end somebody else may want to invest in your care.

“Many of those people who are here now have been people who used to help elderly people before and so they have been rewarded with long life and we want to keep them in that regard,” he said.

The Minister also urged persons who had seniors in their care to do so with a sense of gratitude. He said he was aware that the material and individualistic world pressured one to be selfish but we had to care about the welfare of others.

“If we share the view that all men are brothers and all women are sisters we should have no trouble caring for each other. As we look back over the many years we must ask ourselves have we done enough for those in need?

“Caring is an expression of love and service to humanity and we owe it to each other. If we take away the spirit of caring we take away the joy of living. When we care for others we achieve our own enrichment in the process,” he said.