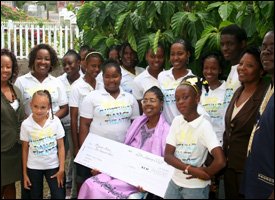 A group of young dancers on Nevis showed their charitable side, when they made a monetary contribution to help defer the medical costs of a Charlestown Secondary School teacher who was stricken with illness  since early last year.

The Rythmz Dance Theatre presented a cheque of EC$4,000 which came from money it had raised at a dance production in honour of Mrs. Maureen Adams at the Cultural Centre in December 2008.

While she presented the gift to Mrs. Adams, the group’s choreographer Ms. Dianne Hobson described the moment as sweet yet sorrowful.

“It is sweet because we are able to support you in your time of need and it is such sorrow that we have to present it to you under these trying circumstances.

“However, when the Rythmz Dance Theatre learnt that the dance production was on behalf of Mrs. Adams they were very eager and willing to participate. This is because you have contributed to so many and you have touched the lives of many in many different ways,” she said.

Ms. Hobson also noted how proud she was of her dancers who so willingly and ably supported the cause and encouraged them to continue to strive for excellence.

In response a wheelchair bound Mrs. Adams said she was thankful for the Nevisian community’s reception to her cause.

“I think it is a wonderful feat that Ms. Hobson and her dance group were able to raise these funds in these trying times. I think it’s wonderful for me it has really buoyed me up.

“From the time that Ms. Hobson told me she had intensions to do this, she has worked at it and worked at it and it has come to fruition and I am so overwhelmed with gratitude and I would like to say thank you to one and all. Thank you!” she said.

While he wished Mrs. Adams a speedy recovery, he commended the dance group members for their contribution and urged the group’s leaders to continue to channel the talent of the youthful dancers in the right direction as youths faced many challenges in the community.

“I want to commend the group as a group understanding and having the heart of a charitable nature and giving to someone who has given to most of us in this constituency throughout the island.

“Supporting this and being excited when they were told the production is in your honour, that is a reflection that they understand, they are caring. I want to wish the group well and as always Mrs Adams mine is speedy recovery,” he said.

Mrs. Adams was the first Extra Mile Teacher’s Award winner, an initiative of the Ministry of Education on Nevis, which annually recognised teachers who went beyond the call of duty and also promoted excellence.

At the time of her illness, she was a teacher at the Charlestown Secondary School who taught Social Studies in the First to Fifth Forms and Caribbean and Communications Studies at the Sixth Form.

In July last year, the school donated EC$12,000 from its fund raising activities to assist Mrs. Adams with her medical expenses.