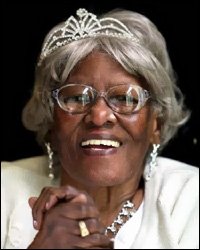 St. Kitts and Nevis‘ High Commissioner to the United Kingdom, His Excellency Dr. James Williams, was among guests attending the 100th Birthday celebration of a national in Manchester, England.

According to the Manchester Evening News, Blanche Slack’s life is a tale of two very different islands with a shared past.

The great-great-grandmother, who celebrated her 100th birthday on Saturday, is believed to be the oldest member of Manchester’s Caribbean community.

She celebrated her birthday at the West Indian Centre, in Moss Side, with guests including Manchester Lord Mayor Alison Firth and His Excellency James Ernest Williams, the High Commissioner of St. Kitts and Nevis.

Mrs. Slack came to Britain in 1961 to join daughter Cynthia, who was working at the Kraft cheese factory at Trafford Park.

It wasn’t her first significant sea crossing – she was born on St. Kitts after her mother went into labour on a boat trip from neighbouring island of Nevis to sell oranges.

Mrs. Slack left school at the age of eight and worked in the cotton fields and sugar plantations of St. Kitts which, 300 years earlier, had become the first Caribbean island to be settled by the British.

She came to Britain with grandchildren Janice Morris, now 58, Patricia Dore, 52, and Joan Cook, 53, as part of the post-war generation invited to rebuild `the mother country’.

She settled in a red-brick terrace at Fairbank Avenue in Moss Side and now lives at the Abbotsford nursing home in Whalley Range.

She said: “I used to pick the cotton from the tree as a child and then when I came to Britain I weaved cotton. Plenty of us would go up in the coach from Moss Side to the mills in Shaw.

When I first felt the cold I wanted to go back. But then I got used to it and then I didn’t want to go back. Those days were lovely.”

The committed Anglican puts her age down to not eating late at night – and a “˜little sherry and whisky now and then.’

And, she told the M.E.N, she still likes to get up and dance to carnival tunes.