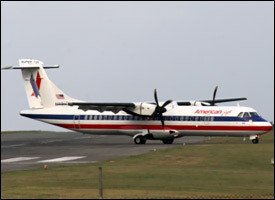 American Airlines is slated to resume its daily flights to and from Nevis later today November 25. Chief Executive Officer (CEO) of the Nevis Tourism Authority (NTA) Mrs. Garcia Thompson – Hendrickson made the announcement ahead of the airline’s first flight, when she spoke with the Department of Information earlier today.

“On November 3, American Eagle’s daily flight into Nevis was cancelled. Today, I am pleased to announce that the service would resume as of today November 25th, 2008. American Eagle Flight 5086 will depart San Juan at 12:40 pm arrive in Nevis at approximately 1:40pm, leaving as the American Flight 5087 for San Juan at 2:30pm,” she explained.

The NTA official also used the opportunity to thank everyone for their patience and understanding during the absence of the American Airlines flight to and from Nevis.